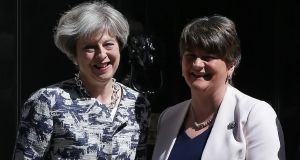 Voters in Northern Ireland overwhelmingly reject a hard Brexit, would vote to remain in the European Union in a second referendum and would prefer checks on goods travelling between Great Britain and the North rather than checks on the Irish Border, according to a special Irish Times/Ipsos MRBI poll in Northern Ireland.

A parallel poll in the Republic finds that almost half of all voters favour a referendum on Irish unity and a clear majority would vote in favour of reunification.