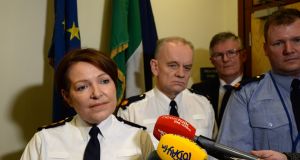 For the full results of the latest Irish Times/Ipsos MRBI poll, click here.

More than 70 per cent of voters believe Garda Commissioner Nóirín O’Sullivan should either resign now or step aside while the Charleton tribunal inquires into an alleged smear campaign against whistleblower Sgt Maurice McCabe, according to the latest Irish Times/Ipsos MRBI poll.

Asked for their view of what the commissioner should do given the allegations to be examined by the tribunal, 34 per cent of voters said Ms O’Sullivan should “resign now” while 37 per cent said she should “step aside until the tribunal concludes”.

Taken together, 71 per cent of respondents to the poll believe Ms O’Sullivan should leave her post either permanently or temporarily.

The finding will increase pressure on Ms O’Sullivan, who has been urged to resign by several opposition politicians, including Labour leader Brendan Howlin.

Separately, 49 per cent of voters say their confidence in An Garda Síochána has been affected by the revelations about Sgt McCabe.

Some 42 per cent of respondents to the poll said their confidence has not been affected, while 8 per cent said they did not know.

The Government agreed to set up a tribunal of inquiry under Mr Justice Peter Charleton to inquire into allegations that Sgt McCabe was the victim of an organised smear campaign by senior Garda officers, including Ms O’Sullivan and her predecessor Martin Callinan.

Both have denied the allegations, though another senior officer, Supt David Taylor, has made a protected disclosure under whistleblowers’ protection laws, claiming that he was authorised and encouraged to spread false and damaging information about Sgt McCabe.

The survey was conducted on Monday and Tuesday of last week among a representative sample of 1,200 voters aged 18 and over in face-to-face interviews at 100 sampling points in all constituencies.

The margin of error is plus or minus 2.8 per cent.