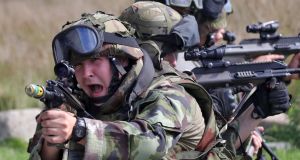 Irish soldiers training in the Glen of Imaal. The Government has already approved Irish participation in the stand-by force, which will also include personnel from Austria, the Czech Republic, Croatia and the Netherlands. Photograph: Colin Keegan/Collins

The participation of the Defence Forces in a German-led battle group next year is to be debated this week in the Dáil.

The Government has already approved Irish participation in the stand-by force, which will also include personnel from Austria, the Czech Republic, Croatia and the Netherlands.

A memorandum of understanding agreed with the other participating countries will be signed once Dáil approval is given.

Minister of State for Defence Paul Kehoe brought a memo to Cabinet last week on the memorandum of understanding and Defence Forces participation in the battle group, which will be on standby for six months from July of next year.

A Fianna Fáil spokesman confirmed the party’s intention to support participation in the battle group, which guarantees a Dáil majority in favour of the proposal.

The Dáil voted by 77 to 39 last week in favour of participation by 14 members of the Army Ranger wing in the UN’s most dangerous mission in Mali.

A battle group refers to a battalion-sized force of 1,500 with support elements including transport and logistics.

EU battle groups are ready for deployment within five to 10 days of an EU Council decision to a possible mission including crisis management and humanitarian assistance missions in Europe.

No battle group has ever been sent into action but is involved in training and remains on standby for potential deployment for the six months. Member states are involved on a rotating basis.

About 10 personnel will be involved in the standby training period but if a deployment was requested, up to 152 Irish soldiers would participate.