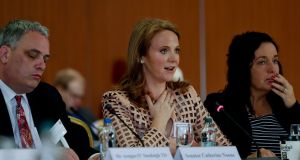 Senator Catherine Noone as she addresses the morning session of the British Irish Parliamentary Assembly with on left Aengus O Snodaigh TD and on right Margaret Murphy O Mahony TD. Photograph: Maxwell’s

Parliamentarians drawn from across Britain and Ireland have voiced strong opposition to any reimposition of a ‘hard border’ between the North and South.

The implications of Brexit were debated for over two hours at the 52nd plenary meeting of the British-Irish Parliamentary Assembly which opened in the Grand Hotel, Malahide on Monday.

There were also various calls including; for Ireland to rejoin the Commonwealth, a border poll on Irish unity, new formal arrangements between Scotland and Ireland, as well as further developing the North-South and East-West bodies to deal with the post-Brexit scenario.

The principal speaker at the opening plenary session was Minister of State for the Diaspora and Overseas Development Aid Joe McHugh,

He said that 56 per cent of citizens in the North had voted against Brexit. “They are now faced with the prospect of their preference being set aside. It raises profound issues in Northern Ireland and in Scotland.

“It seems that Northern Ireland will now find itself outside of the European Union and without the support the EU has provided for the progress made on this island over recent decades.”

Notwithstanding the result, the atmosphere during the session was cordial and constructive with many contributors offering suggestions on how best to protect relations and trade between North and South and between the two islands.

Irish co-chair Sinn Féin TD Kathleen Funchion pointed out the Brexit vote had the potential to “fundamentally change relationships: on our islands.”

Fianna Fáil TD Pat the Cope Gallagher pointed to the way that then EU Commission president Jacques Delors had responded positively to the Good Friday Agreement two decades ago with increasing funding for the peace programme there. Several other speakers said that there are no longer European leaders of the calibre of Mr Delors.

Senator Frank Feighan repeated his call for Ireland to rejoin the Commonwealth.

“The Commonwealth comprises 53 countries, 33 of which are republics and since 1971, the Queen has only a titular role.  It’s also estimated that more than 20 million people of Irish origin live within the Commonwealth.

“I believe Commonwealth membership for the Republic could significantly help protect the strong relationships between both islands, not least economically,” he said.

Sinn Féin speakers including Deputy Aengus O Snodaigh and MLA Barry McElduff said that given that the majority of citizens in the North had voted Remain they favoured a border poll and a move towards a United Ireland.

“I believe if more had been done by Britain to protect small nations within the EU we would be in a better place,” said Mr O Snodaigh.

“We are a small nation and on the edge of Europe. Our future at present is in the EU. We should develop that without diminishing sovereignty in any way,” he said.

No Jacque Delors figure in Brussels

Former Labour leader Joan Burton was highly critical of the reaction of senior figures in Brussels to Brexit. She said that unfortunately there was no Jacque Delors figure in Brussels at present.

“There are people who sound exasperated and venal in their approach to the outcome and its impact on the UK.

“It is very short-term thinking. It does not befit the high offices that some of those people expressing such sentiments occupy.”

“It was a UK referendum and it is over and we must now implement the decision.”

He continued: “The most vital thing we must ensure is that there is no hard border between the Republic of Ireland and the UK.”

The historian Paul Bew (Lord Bew) told the Assembly that there was no doubt in his mind that the Commonwealth would be an institution that would bring more power to Ireland.

William Duffy, a member of the Scottish Parliament, said the referendum had changed the status of Scotland and a second referendum on independence was a distinct possibility.

Former UUP leader Reg Empey (Lord Empey) suggested that the existing architecture of North-South, and East-West, bodies could be developed in the wake of Brexit to strengthen relationships on the two islands.

“The referee’s whistle is blown and there’s no point in complaining the ball is not in the back of the net. It is.

“Let us move on. Let us protect the relationships between the islands but also within this island,” he said.

Labour MP for Warrington, Helen Jones, said what happened in the northern part of England was a “howled anguish from the poorest communities who felt neglected and left behind.

“A lot of it was about immigration but we are to blame for that too. In many communities, the fear is held most strongly where there is little immigration.”

Sen Catherine Noone, Fine Gael, said it was depressing to see how low the turnout of young people was. She also pointed out that younger voters sided heavily with the Remain side.

Brendan Smyth of Fianna Fáil said the common travel area was a “core part of our two societies.”

He said to get from on half of his Cavan-Monaghan constituency to the other he has to cross into Fermanagh three times.

“I don’t want to be stopped on a hard border every time I want to visit my constituency.”

Former SDLP leader Mark Durkan said he had called on the Taoiseach to set up a form from the North and South looking at the implications.

“We have to map for ourselves the issues ahead. We can’t be left just to tailgate the British,” he said.

Mrs Murphy with her two bags of shopping

Denis Landy, a Labour Senator, said his test was always to test this citizen, in his case “Mrs Murphy with her two bags of shopping.” This, he suggested, had not been done in advance of the Brexit referendum and politicians did not get down to the nub of the confusion felt by people.