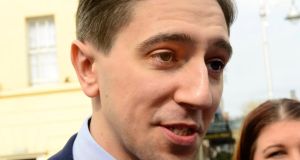 Simon Harris: The Minister for Health said moves were afoot to put together the case for a move to Ireland and there would be a meeting with officials in Brussels to press the case. Photograph: Cyril Byrne / THE IRISH TIMES

The European Union agency will be obliged to leave the UK as a result of Brexit and Mr Harris intends to make the strongest possible case for it to move to Ireland.

The Minister said this weekend that moves were already afoot to put together the case for a move to Ireland and there would be a meeting with officials in Brussels to press the case.

“This is a huge opportunity for Ireland. There are close to 900 direct jobs involved and many indirect spin-off jobs as well,” said a spokeswoman for Mr Harris.

Last week the Irish Pharmaceutical Healthcare Association called for a relocation of the agency from London to Ireland after Brexit.

Responding to that call, the spokeswoman for the Minister said he had asked his officials to prepare for a bid to bring the EMA to Dublin.

“We will be making the case that Dublin offers significant advantages as a location, not least the advantage of the English language, a strong pharmaceutical and R&D sector presence, as well as a proactive and committed national medicines agency, the HPRA, which has built up close working relationships with the EMA.”

She added that the Department of Health recognised the importance of the EMA’s work and the need to keep any disruption of this work to a minimum.

“Dublin looks like the best fit to achieve this and comes with other key advantages such as excellent air connectivity with other EU capitals, and our educated and flexible workforce,” she said.

Departmental officials have already begun laying the ground work and in September the Minister will be proposing the formal establishment of an interdepartmental, interagency working group to flesh out the details of Ireland’s bid.

The Minister hopes that early meetings can be arranged with relevant officials in Brussels and other EU member states to present Ireland’s case for hosting the agency, which has an important role in the protection of public health across Europe.

The EMA is responsible for the protection of public and animal health across the EU through its scientific evaluation and supervision of medicines.

The agency, which employs 850 people, is currently based at Canary Wharf in London.