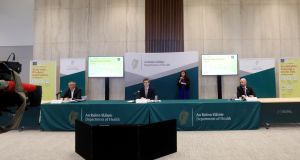 Friday’s figures from the National Public Health Emergency Team (NPHET) indicated that 121 of 211 new Covid-19 cases were in Dublin, with one new death.

The State is facing additional health costs of well over €3 billion to deal with the impact of Covid-19 and other pressures on services this winter and into next year, as part of plans being considered by the Government.

Ministers are also set to announce next week an overall framework for the State on living with Covid-19 over the next six months. As part of this plan, health services for the winter are expected to cost in the regional of €600 million.

It is also understood the bill for personal protective equipment in the last quarter of 2020 and over 2021 is likely to reach €1.5 billion.

In addition the cost of putting in place and operating a revised testing and tracing system has been forecast at between €900 million and €1 billion over the same period.

The Government’s plan to be published next week is expected to see the entire State placed on Level 2 status, the second most benign of the five levels. This is despite current case high levels in Dublin warranting Level 3 at least.

Government sources said Dublin was likely to be included with all other counties on Level 2, with some text to acknowledge higher levels of the virus in the capital.

Yesterday’s figures from the National Public Health Emergency Team (NPHET) reported 121 of 211 new Covid-19 cases were in Dublin, with one new death.

Over time the plan will allow for different regions to be at different levels, depending on the situation on the ground, sources said. However, no more than two levels would be allowed at any one time in the State, given its small geographic size.

At Level 2 status, sports grounds would allow no more than 50 supporters, according to NPHET advice to the Cabinet. However, Ministers at the Cabinet sub-committee on Thursday expressed strong disagreement at those low numbers and the plan is expected to increase the numbers allowed under each level significantly, to several hundred under Level 2.

The Government is also considering allowing larger attendance, up to 5,000 at large stadia, but numbers have not been finalised.

Minister for Transport Eamon Ryan also hinted yesterday the Government will consider switching from quarantine to testing for people entering the country.

The Government is expected to adopt the EU colour-coded proposal for common travel which favours testing over quarantine. “I believe that has real benefits. ” he said .

Amid increasing pressure on public finances due to Covid-19, it has also emerged that any across the board public sector wage rises are unlikely next year as part of any new pay accord . The Department of Public Expenditure held preliminary talks with public service unions this week .

Yesterday Tánaiste Leo Varadkar said Ireland could suffer “multiple economic hits” from Covid-19. He said many hypotheses assume the pandemic will only have one economic hit. “It is more likely that there will be multiple waves,” he said.