Ireland gained from Thatcher rule, as did Sinn Féin 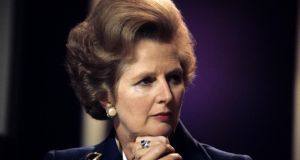 Margaret Thatcher’s funeral is already controversial in Britain, and it’s not due to take place until Wednesday. Photograph: PA Wire

At Charlie Haughey’s funeral there was a great deal of silence, and crash barriers stood at the side of the roads for the crowds that never came. It is not that there was any enmity, or undignified protest. The then taoiseach, Bertie Ahern, gave the oration at the graveside and in the specially erected press stand we could hear every careful word of it.

There were no riots threatened, no insulting songs going up the charts, no world leaders present as far I recall. In the end our most controversial and scandalous leader – and probably our most talented – was buried quietly as the tumbleweed rolled by. He was a brilliant man, but he had had no ideas. It was sad.

Baroness Margaret Thatcher’s funeral is already controversial in Britain, and it’s not due to take place until Wednesday. Millwall fans have said they’re ready to counter any anti-Thatcher protests as they come out from one of their games, due to end at about 7pm on Wednesday.

How strange it is that the death of an elderly woman, whose physical health and mental faculties have been in decline for 20 years, should spark such extraordinary devotion and vitriol in her own country. The Brits are a bit barking, after all.

But Ireland could pay no bigger tribute to the late baroness than the fuss in its media over her death. With our long memories and our hair-trigger hurt, we have demonstrated conclusively that Thatcher was the last person to come to Irish politics with any ideas or convictions – in fact she had rather too much of both.

This ungracious hissy fit of ours has also demonstrated – very regrettably, to those of us who want some cultural independence for the country – how Ireland is still a tributary, a very, very small tributary, of the British political system. Oh, how we’re going to miss having someone to blame.

I call Sinn Féin ungrateful. Thatcher was the best thing that ever happened to them. Everybody knows that the hunger strikes, in which 10 men starved themselves to death, nourished the modern Sinn Féin. And we all had a good laugh during the week over Gerry Adams and Gerry Kelly – Gerry Kelly! – calling Thatcher militaristic. “Equality is our watchword”, as Adams so succinctly put it at the party’s ardfheis on Saturday. That must be why Adams has never been a member of the IRA.

It was left to a former hunger striker, Laurence McKeown, to remember elsewhere that it was the British Labour Party that had instigated the prison regime that ended in the hunger strikes. Just as he pointed out that Tony Blair’s invasion of Iraq has resulted in thousands and thousands more deaths than Thatcher’s Falklands War.

But such clear thinking is rare. It is an amazing fact of Irish life, north and south of the Border, that you can be a card-carrying republican while simultaneously supporting Manchester United and dodging your tax.

Similarly, you can despise and scorn Thatcher as a war-mongering Brit who never understood us sensitive Celts, while vacuuming up the benefits of her rule: everything from the deregulated financial markets to the cheaper spectacles which resulted from her deregulation of the opticians’ monopoly. On the subject of financial deregulation we should all have gone to Specsavers, but it seemed like a good idea at the time; and when Ireland adopted the idea some years later.

For those of us who were around in the Thatcher years, and tried to oppose her in our inadequate way, the problem with her was that she was too unpredictable for our small minds. She just kept doing stuff she wasn’t supposed to, and no matter how many Red Wedge records you bought you couldn’t stop her. She stole the working class from the trade unions and the British Labour Party, who never got over it.

She blazed a trail for women, to the bewilderment of feminists who seriously tried to make the point that she couldn’t be a woman because she wasn’t left wing. Even at the time, as a feminist I found that offensive. But to hear it repeated now is downright infuriating. If it is true, as the Madeleine Albright quote has it, that there is a special place in hell for women who don’t help other women, then that special place in hell must be rather full. No, Thatcher did not help with childcare, or to establish creches. What did they think she was, a social worker?

Her opponents’ response to her, male and female, was extraordinarily sexist. People are still disappointed that Thatcher was not a member of the fairer sex. But guess what, there is no fairer sex. Women will send your sons to war and your community to the slag heap just as quickly as the men will. Welcome to politics.

Thatcher was full of ideas. A lot of them were lousy. She was divisive when she did not have to be. She was starry-eyed about capitalism. She made a lot of mistakes that other people paid for. But she had political goals beyond her own aggrandisement and survival. She was brave. She had convictions. The pity of it is, from an Irish point of view, that she changed this country a lot more than our own taoisigh who were her contemporaries did. That’s why we miss her already.