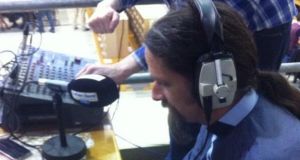 Luke Ming Flanagan in a count centre in Cavan. He is on course for a European Parliament seat in Midlands North West. Photograph: Aine McMahon

The electorate has bluntly told the Government parties it is no longer prepared to pay what they have presented as the “present price for our future prosperity”.

A combination of early tallies and an exit poll conducted for RTÉ indicates that voters have reached out to political alternatives in the form of Independents and small parties, with Sinn Féin in particular performing well in Dublin.

The Green Party, wiped out in the game-changing General Election of 2011, has a cautious spring in its step again, with its candidates in with a shot in the national and local polls.

Labour has been on the wrong side of “the big Mo” for the duration of the campaign so its slump in support was as inevitable as it is severe.

As a straw in the wind, early tallies showing the Labour Lord Mayor of Dublin Oisín Quinn on eight per cent in parts of Rathgar/Rathmines; areas that would have been expected to back him strongly, have caused for concern for the party.

“He’s not in trouble, but he’s not safe,” was the assessment of one experienced tallyman.

Minister of State at the Department of Foreign Affairs Joe Costello was at the RDS count centre early.

The husband of Labour’s MEP candidate Emer Costello admitted he did not like implications of RTÉ’s Behaviour and Attitudes exit poll.

It placed the party at 7 per cent in the local elections and 6 in the Europeans, a big drop from the record 19 per cent it scored in 2011.

Disappointing” was Mr Costello’s assessment. “But we’ll have a better idea when the tallies come in”.

But the tallies are not bringing a better tale for his party. Minister for Communications Pat Rabbitte diagnosed the electorate’s “austerity fatigue” some time ago.

But the electorate has clearly disagreed with his recent assessment of the Government’s approach to our economic problems: “There is no other way.”

So far today Fine Gael has been quiet. A damaged Labour Party will not help the coalition’s stability, but Labour’s woes are masking to a degree the fact that the larger partner’s vote is also sharply down.

Minister for Jobs Richard Bruton noted Sinn Féin was doing “really well” and observed that Independent MEP candidate Nessa Childers was doing reasonably well on the Northside of Dublin, which he said was a “good omen for her”.

But as for his take on how the Government parties are doing? “I’m long enough in this business to know you don’t call it in the morning,” he said.

Fianna Fáil has seen an increase of five per cent on its General Election showing, according to the exit poll, and the party’s European candidate is polling respectably so far, she and Green Party leader Eamon Ryan could be neck and neck.

However, there remains a sense among Fianna Fáil supporters at the RDS that the party has not quite capitalised on the voters’ drift away from the Government parties.

For the political left, a unified campaign could have paid huge dividends.

Tallies of the European boxes show People Before Profit’s Bríd Smith edging ahead of Socialist Party’s Paul Murphy, but this could change as the day progresses.

Sinn Féin’s Dublin MEP candidate Lynn Boylan is flying high, and it looks like the party’s support in the Europeans will be in the very high teens, up from 10 per cent in the General Election.

Chris Andrews, previously Fianna Fáil, scored a massive vote under the Sinn Féin umbrella in the locals and would probably have had enough to bring in a running mate.

Fine Gael Taoiseach Liam Cosgrave was the first to articulate the “present price for our future prosperity” argument back in 1975. The public liked that about as much as being told to “tighten our belts” by Fianna Fáil’s Charlie Haughey.

Canvassers who reported apathy at the start of the campaign saw it dissipate to be replaced with anger.

Now the Government parties are paying the price for what a large portion of the electorate has decided is their commitment to austerity at all costs.