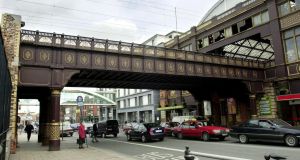 Westland Row railway bridge in Dublin. Less than one-tenth of those who commute into and around Dublin travel by rail, according to a major report on Ireland’s railways. Photograph: Peter Thursfield

Less than one-tenth of those who commute into and around Dublin travel by rail, according to a major report on Ireland’s railways which warns that Iarnród Éireann could face insolvency unless it gets more State money.

The National Transport Authority’s review was considered by Cabinet on Tuesday and later published – it declares the semi-State needs an extra €103 million a year over the next five years to ensure its survival.

Worsening congestion on the capital’s roads is likely to mean that commuting numbers, including those who travel by Luas, will rise from the current 7 per cent figure, the report predicts.

However, the railways are failing, or unable to deal with commuters in the other cities. Just 1 per cent of people working in Cork, Limerick and Waterford travel by rail.

In Cork, houses have been built away from existing stations, rather than near them, making rail travel unattractive: “[This] is a major issue for the city and needs to be addressed,” it goes on.

Barry Kenny, Communications Manager at Iarnród Éireann, maintains that the report is not saying - “come along and give us the money,” it is saying “here are the options”.

“If the view of the wider public and political powers - is that ‘the amount of money you have right now is all you’re getting’, then to deliver an effective service a lot of lines have to be closed,” he told the Pat Kenny show on Newstalk.

Meanwhile, rail commuting is “almost irrelevant” for Galway. Fewer than 400 people travel into the city on the Galway/Limerick line.

In Waterford, “the use of rail for travel to work is negligible and is likely to remain so given the populations and scale of demand”.

In Limerick, rail will find it “extremely challenging to play a significant role”.

Some rural routes should be considered for closure, it argues. The Limerick to Ballybrophy (via Nenagh) line carries as few as 22,856 a year, costing €550 per passenger.

The review said all five stations between Ballybrophy and Limerick – Roscrea, Cloughjordan, Nenagh, Birdhill and Castleconnell – and all four stations between Limerick Junction and Waterford – Tipperary town, Cahir, Clonmel and Carrick-on-Suir – are among the 15 least-used on the network.

Labour TD Alan Kelly criticised closure calls, saying more investment is needed. Vital pieces of infrastructure should be protected and were not designed to make profits.

The report also suggests the Ennis to Athenry line, which was only revived in 2010 at a cost of €100 million, might be a target for closure, though its possible expansion is mentioned in the coalition deal.

Defending the link, Minister of State Séan Canney said passenger numbers had doubled over the past year, helped by online ticketing and more useful timetables.

With the exception of Cork’s Kent Station, all of the top 10 stations were located in Dublin.

David Franks, chief executive of Iarnród Éireann, said the State subvention must rise, or else fares will have to do so.

The current level of funding is “unsustainable” and was the primary cause for the deterioration of the infrastructure.