Iarnród Éireann cuts to be resisted by seven Ministers 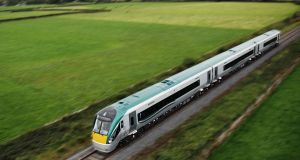 Seven Ministers of State have said they will resist any reduction in services at Iarnród Éireann, which has been identified as needing hundreds of million of euro to ensure its survival.

The development puts further pressure on Minister for Transport Shane Ross given four of his colleagues in the Independent Alliance are among those who have made a written submission to the National Transport Authority (NTA) on the future of the rail network.

The submission, seen by The Irish Times, also urges Mr Ross to “clarify the future role of railways in the Irish economy”.

Minister of State at the Office of Public Works Sean Canney, who wrote the submission, said he would not be in favour of a reduction in services.

“I strongly believe that our national rail network is not operating at its full capacity,” the Independent Alliance TD said. “The programme for government that we signed up to commits to maintaining public transport and investing in services. That is our position.”

Mr Ross launched a public consultation on rail services after a report by the NTA warned the company may become insolvent. The review stressed an extra €103 million a year was needed over the next five years to ensure its survival.

In a recent interview Mr Ross said he could not rule out the closure of rail routes, singling out the Limerick-Ballybrophy line.

The submission says significant improvements must be introduced to assist passengers, including increased security and the introduction of a railway division within An Garda Síochána.

It argues for more competitive fares, a designated quiet carriage on every train and the offer of refreshments on every intercity service. It calls for Mr Ross to publish a long-term railway strategy and a budget accordingly.

In a separate submission, Fianna Fáil strongly criticised any proposals to close rail routes. The party’s transport spokesman, Robert Troy, said lines should be developed rather than reduced.

“We need a different vision for saving the rail network which squarely places making rail travel more attractive and reliable for passengers at the core of the strategy.

“Instead of closing rail lines due to under-utilisation, the objective should be to boost passenger numbers using rail via increased and sustained State investment coupled with a more innovative strategy to enhance attractiveness, reliability and integration of rail services for growing passenger numbers on a continual and planned basis.”

A spokesman for Mr Ross said he had not made a submission but would consider the final review from the NTA before making any decisions.