While some GPs have complained about shortages, HSE says only half the order has arrived 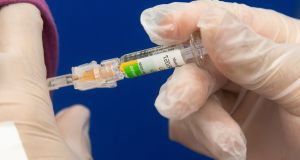 A file image of a flu shot being administered. The HSE says vaccines it has ordered for this winter will be available within the deadlines it has set. Photograph: EPA

The Health Service Executive has said the 2 million flu vaccines it has ordered for this winter will be available within the deadlines it set out.

A number of GPs have said they have already exhausted the vaccines supplied to them by the HSE.

Prominent Dublin-based GP Maitiú Ó Tuathail tweeted that after his first flu vaccine clinic there was a strong take-up, especially among over 70s.

“Unfortunately, we’ve already run out and now have to set up a waiting list for the next round.

GPs received far less vaccines than we did last year,” he said.

The HSE and the pharmaceutical sector have said more vaccines than last year will be available in 2020, at 1.35 million flu injection doses for adults, compared to 1.1 million last year. It has also ordered 600,000 nasal doses for children aged between 2 and 12 years of age.

However, delivery has been staggered. The first batch, comprising 50 per cent of the total order, has already been delivered.

There was a delay of two weeks with the initial shipments, according to a source in the pharmaceutical sector.

This was attributed to having to wait for authorities in France to license this year’s quadrivalent influenza vaccine. The HSE said this would not affect the delivery timetable

Another reason, alluded to by Dr Ó Tuathail, is that take-up this year might be higher because of higher awareness of the threat of the so-called ‘twindemic’ of flu and Covid-19.

The flu vaccine take-up among older people is high with 69 per cent of over-65s availing of the free injection last year, compared to an EU average of 41 per cent.

Take-up this year is expected to be higher. Vaccine shots will be delivered by GPs and also by pharmacists.

The vaccine will also be offered free to health care workers. Last year 60 per cent availed of the vaccine but the HSE has set a target of 75 per cent this year.

On Thursday, HSE chief executive Paul Reid said it would be “unconscionable” for a healthcare worker not to get the flu vaccine this winter, given the threat posed by Covid-19.

“Of all the years, I can’t understand why any healthcare worker would not get the vaccine this year, especially if they are working in a setting with vulnerable people,” HSE chief clinical officer Dr Colm Henry told a Covid-19 briefing on Thursday.

For the first time, all children between the ages of two and 12 are entitled to a free flu vaccine. Children will get a nasal vaccine rather than an injection.

While most children get mild doses of flu, there are some serious cases. According to the HSE, In the last 10 years, almost 5,000 children were admitted to hospital with complications of flu.

Almost 200 children had treatment in intensive care for flu and 40 children died.