Hotelier and Fianna Fáil politician served as councillor for 55 years 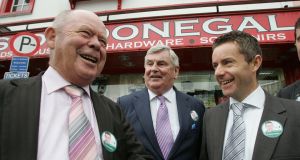 Ireland’s longest serving councillor, Seán McEniff, died on Friday at the age of 81.

The hotelier had been seriously ill in hospital in Dublin following an accident in the Canary Islands last October.

He was a councillor for 55 years, having served first on Bundoran Town Council and later also on Donegal County Council. He served periods as Cathaoirleach on both councils.

He was known as Mr Bundoran because of his enormous contribution, in business and tourism, to his native town.

And he was a brother of former Donegal All-Ireland football manager Brian McEniff.

Fianna Fáil leader Micheál Martin led a host of tributes, saying “Seán was a proud Donegal man and played an integral role in the promotion and development of business and tourism in the county and the North West region”.