Hogan apology helps but he must explain his actions, says Tánaiste 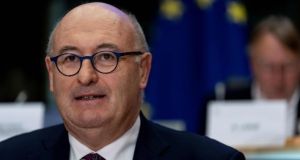 Tánaiste Leo Varadkar has said the EU Commissioner Phil Hogan’s latest apology “definitely helps” but that he needs to “account for himself and explain his own actions”.

Mr Varadkar said he and the Taoiseach Micheál Martin spoke to Mr Hogan on Saturday and that he believes he has “broken no law” in attending an Oireachtas Golf Society dinner earlier this week but accepts that he “may have breached some of the Government’s public health guidelines”.

Mr Varadkar said while he welcomed an apology issued by Mr Hogan on Sunday, “it would have been better if it had come sooner”.

“He [Mr Hogan] does accept that he may have breached some of the Government’s public health guidelines but he believes that’s an honest mistake, that he is not resident in the country and wouldn’t be as familiar with them as a cabinet minister for example, who signed off on them,” Mr Varadkar told RTÉ’s News at One on Sunday.

Mr Hogan said on Sunday he will not be resigning from his position as EU Commissioner for Trade and apologised “fully and unreservedly” for attending the event in Clifden, Go Galway where more than 80 people gathered for dinner.

Mr Varadkar said he had not spoken to European Commission president Ursula Von der Leyen, who would have the power to remove Mr Hogan from office, but that she is aware of the situation.

Mr Varadkar said if Mr Hogan is unable to do this “well then he needs to consider his position and that’s what we said to him yesterday”.

The Fine Gael leader said he has confidence in Mr Hogan’s ability to do his job and that he has done a “good job” in the post so far.

Mr Varadkar said the event in Co Galway “should not have happened” and that it was “a huge insult” to people who have had to cancel weddings, christenings, confirmations and sporting events.

“At the very least it should have been cancelled on Tuesday after the Government tightened restrictions on social gatherings and those who attended should not have attended,” he said.

“I believe it has done serious damage to our national efforts to suppress the Covid virus, which depends on national unity, which is undermined.”

Mr Varadkar said he would not comment on Supreme Court judge Séamus Wolfe attending the dinner as the Constitution sets out a separation between the Government and judiciary.

Mr Varadkar said he did not know about the event but “that is not to say my office didn’t receive an invitation; I haven’t checked that”.

Separately, Mr Varadkar said relations between him and the Taoiseach are “good” and that the Government is “stable”.

He said the Dáil will reconvene in a week to review schools reopening and also to look at legislation needed for gardaí to give them extra powers to shut down certain events.

Sinn Féin leader Mary Lou McDonald said the events of recent weeks and months have demonstrated that “this is a very chaotic and unstable administration”.

“It’s one that seems to be based on rivalry rather than common purpose and it is one that has not only failed to communicate a message or a mission to the public but it has succeeded in causing anger and actually unnerving public opinion,” she said.

Ms McDonald said it would be “very alarming and would certainly deepen the sense of crisis and chaos if the commissioner were to stay on despite having lost the confidence of the Taoiseach and the Tánaiste”.

Fianna Fáil TD Jim O’Callaghan said in relation to Mr Hogan that it must be ensured anger “does not dictate our response completely”.

“We need to recognise that this is an issue about what’s in the national interest rather than just seeking to punish him for the foolish mistake he made last Wednesday evening,” he said.

“He is the trade commissioner, if he resigns, the likelihood is that Ireland will lose that portfolio. If we lose that portfolio, President Von der Leyen will pass it to some other official from another country and we will lose a huge advantage in respect of the Brexit talks.

“So my own view is in respect of Phil Hogan is that although he was foolish to attend, it was very unfair in what he did in terms of the sacrifices being made by the Irish public, I think on the basis of the national interest it probably would be contrary to the national interest if we lost that trade portfolio.”