Helen McEntee to take questions on Woulfe controversy in Dáil 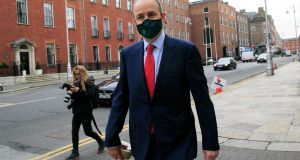 Taoiseach Micheál Martin arrives for an all party meeting in relation to the Séamus Woulfe controversy at Government Buidlings on Merrion Street, Dublin. Photo: Gareth Chaney/Collins

Minister for Justice Helen McEntee has written to the Ceann Comhairle to say she will take questions in the Dáil on former attorney general Séamus Woulfe, who was the single nomination who emerged from a process run by the Judicial Appointments Advisory Board (JAAB).

In her letter, Ms McEntee said: “As Minister for Justice, it is my duty to respect the independence of the judiciary, a cornerstone of our State and system of government.

“I and the Government have grave concerns that the manner of Dáil debate being proposed by the Opposition on judicial appointments could generate inappropriate comment around serving judges on the floor of the House.

“The concerns as outlined by the Taoiseach and the Tánaiste this week are shared across Government.”

However, she said she was also conscious of the responsibility of ministers to be accountable to the Dáil.

“Deputies can table parliamentary questions and oral questions to me and Government colleagues on numerous issues,” she said.

“I would ask the business committee to reschedule my next session of oral ministerial questions, currently due to take place on December 15th, to a date that meets the satisfaction of members.”

She said the process of oral questions would ensure that members can raise concerns across numerous issues “within the parameters of normal parliamentary procedures”.

Earlier, Taoiseach Micheál Martin has indicated the Coalition may discontinue the practice of judicial appointments being discussed by the most senior figures in government before a person is nominated to the Cabinet.

Minister for Justice Helen McEntee diverted from long-standing practice by not disclosing to the Taoiseach, Green Party leader Eamon Ryan or Attorney General Paul Gallagher that three judges had expressed interest in the vacancy in the Supreme Court.

Ms McEntee told them that former attorney general Séamus Woulfe, who was still a barrister, was the single nomination who emerged from a process run by the Judicial Appointments Advisory Board (JAAB).

Sitting judges do not apply through JAAB but indicate their interest to Government and their names are kept on file in the Department of Justice. Ms McEntee did not disclose their interest to Mr Martin, Mr Ryan or Mr Gallagher ahead of Mr Woulfe’s nomination being approved by Cabinet.

Mr Martin also said that Mr Varadkar had told himself and Mr Ryan “as a matter of courtesy” at an earlier juncture that Mr Woulfe had come through the JAAB.

However, in the Dáil on Wednesday, Mr Martin said he didn’t believe “politicians should be embroiled” in who should be a judge or not a judge. He said that when he learned that JAAB and Chief Justice Frank Clarke that Mr Woulfe was a suitable candidate “that was good enough for me”.

It was received as an indication future decisions on the appointment of judges will be the sole preserve of the Minister for Justice without consultation with the Taoiseach of the day, or other coalition leaders.

It is uncertain what information about the potential candidates Ms McEntee conveyed to her Fine Gael party leader, and Tánaiste Leo Varadkar. Unlike Mr Martin or Mr Ryan, he would not confirm or deny what Ms McEntee told him about the appointments.

The Government has played down the significance of Ms McEntee’s actions and has consistently refused Opposition requests for the Minister to make a statement on the matter and to answer questions.

The Irish Times has spoken to former ministers with direct experience of this issue who said it was normal practice for the minister for justice to discuss the candidates in the two separate channels – the JAAB process and sitting judges–- before recommending one person to Cabinet.

Opposition whips have said they will press for this issue to be allotted time when the business committee of the Dáil meets.

During Leaders Questions in the Dáil, Sinn Féin leader Mary Lou McDonald reminded Mr Martin that in 2017, when in opposition, he called for a debate and questions on the appointment of then attorney general Máire Whelan to the Court of Appeal.

However, Mr Martin replied the cases were not comparable as Mr Woulfe had gone through the JAAB process and Ms Whelan had not.

The Government has argued it would not be possible for a Dáil debate on the issue to avoid discussing the merits of successful and unsuccessful candidates.

The Taoiseach rejected Sinn Féin claims of “horse trading” in Government over the appointments of the Attorney General and Supreme Court judge, Mr Woulfe.

He said it was an “untruth” and a “false assertion” as he called on Sinn Féin leader Mary Lou McDonald to withdraw the claim.

He also reiterated a number of times that he had “no interest in embroiling myself any further” in the controversy over the judicial appointnment.

Ms McDonald, however, insisted horse trading was involved and her claim was “verifiably truthful” because it played out in the media.

She renewed her calls for Ms McEntee to address the Dáil and answer questions about the appointment.

She told the Taoiseach that in government formation talks between Fianna Fáil and Fine Gael “you announced that the position of Attorney General would be rotated in line with that of Taoiseach”.

Repeating her call for Ms McEntee to address the House “very clearly about how she whittled four names down to one” because three sitting judges had expressed an interested in the position in the position.

And she again contrasted the Taoiseach’s approach to his response in 2017 when attorney general Ms Whelan was appointed to the Appeals Court.

She said Mr Martin described it as an insider appointment and it “stinks to the high heavens. You were incredulous that other applicants had not been treated fairly”. She added that a Dáil debated took place on that appointment.

Ms McDonald said the Government “reaching for the separation of powers” to avoid the issue was “bogus”.

The Taoiseach told her that her calls for who Ms McEntee “collaborated with” on the appointment and what criteria were used was “the very reason why, in my opinion, Minister McEntee shouldn’t have to say to people and compare judges”.

He said the Chief Justice chaired the JAAB appointments process.

But Ms McDonald described Mr Martin’s response as “incoherent gibberish” and said that the Taoiseach knew that the JAAB process was one of two channels through which names came forward.

She said it was verifiable truth that there was horse trading because it was played out in the media.

Mr Martin has also rejected Labour leader Alan Kelly’s assertion that the appointment did not follow the process laid down by the Cabinet rule book.

The issue was raised again by Sinn Féin later in the Dáil when Ms McEntee opened a debate on community safety and crime prevention.

The party’s justice spokesman Martin Kenny told the Minister that without knowing the process she used to select Mr Justice Woulfe from four names under consideration “the charge is that the Fine Gael credentials of the former attorney general outweighed or somehow were scored higher than the clear judicial experience of the others who were seeking that nomination”.

Mr Kenny renewed his party’s call for the Minister to come into the Dáil to address the issue. He said “we’re all aware that that Judicial Appointment Advisory Board selects people who are eligible for consideration. What we need to know is the process you used to make that selection – or what colleagues joined with you in assisting you in that process.”