Harry McGee: It looks like advantage Fianna Fáil and the Greens

The Greens draw a lot of support from the urban middle classes, and could cannibalise Fine Gael’s ambitions 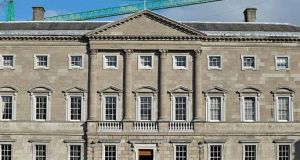 The narrative for most of the past year has been that the two big parties are neck and neck in the polls, and the election could fall either way. That may well turn out to be the case but not on the basis of poll logic. Photograph: Getty Images

And so the big questions of 2020. When’s the general election going to be? Who’s going to win the election? When will Brexit actually happen? Will Dublin win the six in a row? Will Fr Ray Kelly be the Des Cahill of this year’s Dancing with the Stars? Big questions all.

The way for any self-respecting commentator to deal with any of those is to make a firm and decisive decision to sit on the fence until your backside is well numbed. But driven by hubris and vanity, few of us do.

Ignoring Santayana’s warning that those who cannot remember the past are condemned to repeat it, we blunder on blindly, and proclaim such trifles as the identity of the next taoiseach or the composition of the next government.

Ah, we point out, we have modern scientific tools! Opinion polls – the wonder of the age!

The world has changed a lot since George Gallup popularised polls almost a century ago. Then everybody was willing to participate. Now in the US people don’t bother, especially from the most marginalised sections, and pollsters have to make assumptions about how some demographics vote. That’s guessing in other words.

Newer innovations like telephone polls and online polls have their drawback. And then you are applying hard maths to the gloop of people’s opinions – half-formed or not even formed – many months ahead of the actual poll.

The fact is our system is complicated. Fine Gael may be well ahead of Fianna Fáil in Dublin but it’s unlikely to deliver a seat bonus

People also tell porkies to pollsters. You have your shy Tories and your hush-hush Fianna Fáilers, and those who would like other people to think they voted Green even though they voted for somebody else.

The polls also sample from a potential 100 per cent of the population even though only between 50 per cent to 70 per cent will actually vote in a general election, depending on what constituency you pick.

I think people over-interpret the merits of the pattern that emerges from a succession of polls. And that’s not even getting into our complicated voting system.

Polls just can’t cope with a real-life situation such as in 2016 where the tiny surplus of Joan Collins in Dublin South-Central allowed Bríd Smith to pip Catherine Ardagh for the final seat.

Polls are at their most accurate and useful only in the days and hours leading up to a general election. Even then in 2016 some polls were showing a 10-point gap between Fine Gael and Fianna Fáil only days before the election, where the actual figure was 1.2 per cent. The only polls that are bang on are the exit polls, with huge samples of people (3,000) who have actually voted.

The narrative for most of the past year has been that the two big parties are neck and neck in the polls, and the election could fall either way. That may well turn out to be the case but not on the basis of poll logic.

The fact is our system is complicated. Fine Gael may be well ahead of Fianna Fáil in Dublin but it’s unlikely to deliver a seat bonus. The party is down one seat in Dún Laoghaire already (it will never retain three out of four). It will struggle to hold on in a few other constituencies such as Dublin North-West and Dublin South-Central.

And its potential for gains is limited – Dublin Rathdown maybe, and much more marginally, Dublin South-West and Dublin West.

Besides, the Greens will have potential gains in Dún Laoghaire, Dublin Bay North, Dublin West, Dublin South-Central, (possibly) Dublin Central and Wicklow; and then will be in the hunt in Cork South-Central, Limerick City, Waterford, Kildare North and Galway West. The Greens draw a lot of support from the urban middle classes, and could cannibalise Fine Gael’s ambitions.

If Fine Gael is to make gains it will have to pick up a seat in most Cork constituencies, in Tipperary, in Cavan-Monaghan, in Louth, in Kerry, and in Longford-Westmeath.

It has a good chance of taking two seats in Wexford and in Longford-Westmeath, in Limerick City and in Clare. On a good day it could be going for three in Carlow-Kilkenny and in Laois-Offaly. Against that its two seats are vulnerable in both Wicklow and Kildare North.

Sinn Féin and the smaller left-wing parties fared poorly in the May elections. Sinn Féin bucked expectations in the byelections but will struggle in Kerry, Carlow-Kilkenny, Cork East, Limerick City, Wicklow and Louth (where it has two seats), Dublin Bay North, and maybe Dublin North-West.

Labour will likely lose its seat in Longford-Westmeath, but has chances (varying) of picking up in Louth, Dublin Bay North, Kildare South, Cork North-Central, Waterford, and Dublin Bay South.

The Social Democrats might double their numbers (with Dublin Central and Dublin Bay North being their biggest chances).

Against that, Independents and small left-wing parties will be a diminished presence in the 33rd Dáil.

These outcomes will depend on sometimes tiny margins on the 12th count which no poll can ever capture. But when you put your neck out it no longer seems quite neck and neck.

At this moment it looks to me at least like advantage Fianna Fáil and Greens and (less so) Labour. And the Dubs for Six. And Mary Kennedy to win Dancing with the Stars.