Hard to tell if Fianna Fáil, in dire need of re-energising, is waving or drowning

FF’s recent think-in was low key, trying to appear calm rather than becalmed 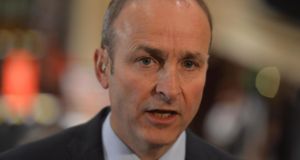 In sport, they call the third quarter the “moving quarter”, during which the team with the momentum and strength behind it takes a firm grip on the game.

We’re well into that juncture in the political cycle and yet for Fianna Fáil, it just does not seem to be happening at the moment. Initially, it bounced back more strongly than people expected after the debacle of 2011, but of late, the party has lost its way a little and seems to lack energy and motivation.

It seems to be treading water and, viewed from the banks, it’s hard to know if it’s waving or drowning. Meanwhile, the Sinn Féin synchronised swimming team is flying quickly past, with all its team members perfectly co-ordinated.

Political party think-ins are something of a construct – a little bit of socialising, a little bit of strategy, a little bit of education (guest speakers coming in), and a little bit of a media event. The Fianna Fáil one in the old-fashioned and very pleasant Abbey Hotel in Roscommon was a low-key affair, the party trying to give the impression of calm, rather than becalmed.

Yes, there are a number of things to worry about. The party’s showing in opinion polls has been mediocre to say the least and it has also struggled to assert itself in the national consciousness of late. There is the continuing recovery of the economy, which of course it can’t complain about, but politically that should benefit the coalition parties.

Of the four big parties, Fianna Fáil probably stayed closest to the “think-in” formula. It had a range of speakers on areas such as the economy, water and social inclusion.

Perhaps the most pertinent session was that with Dr Yvonne Galligan of Queen’s University Belfast, who has been asked by the party to come up with means to address its appallingly low percentage of women public representatives. It is clear from Micheál Martin’s comments afterwards that the stick rather than the carrot will be used to ensure targets are met.

Martin’s attack on the Government “cooking the books” on health had some justification, but it was old-fashioned politics, nakedly so. The talk about possible coalition partners after the next election was a distraction.

Fianna Fáil points out that nobody predicted it would become the biggest party after the local elections. That’s the party’s response to poor opinion polls.

Local elections though aren’t general elections – nor are opinion polls for that matter. It can’t be forgotten that the party had a terrible European election on the same day.

As the Dáil returns today, its strategists need to work on re-energising the party. It needs an immediate shot of adrenalin and is pinning its hopes on Ivan Connaughton in the Roscommon South-Leitrim byelection on October 10th. Longer term, it needs to develop new policies and set out a vision of what it stands for.

Martin dismissed Fine Gael as too right-wing – well, his party should then actually spell out in clear language the policy issues where it diverts radically from its traditional adversary.