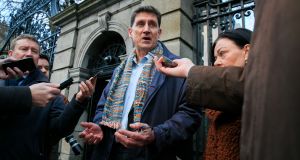 Green Party leader Eamon Ryan is pictured speaking to the media after talks with Sinn Féin on Monday. He said any viable coalition would need ‘around 85-plus’ votes in the Dáil to provide stable government. Photograph: Gareth Chaney/Collins.

Green Party TDs met Sinn Féin representatives on Monday for preliminary talks about possiblly forming a government, as a week of negotiations between the parties got underway at Leinster House.

The Greens have scheduled further talks with Sinn Féin for Tuesday in addition to two days of discussions with Fianna Fáil on Wednesday and Thursday.

Party leader Eamon Ryan said he also expected to meet Fine Gael and the Social Democrats before the Dáil reconvenes next week for further votes on who would be the next taoiseach.

Fianna Fáil representatives are meeting Independent TDs this week, with Kerry independent Michael Healy-Rae confirming earlier that he and his brother, Danny, and other rural deputies would hold talks with Mr Martin on Tuesday.

“This is very welcome as the people want to see their politicians working and talking, to try and put together a programme for Government in order to provide stability for the country,” Mr Healy-Rae said in a tweet.

However, sources in all parties say these talks are at an early stage and few in Leinster House expect a breakthrough in time for the Dáil’s next meeting on Thursday of next week.

Mr Ryan described the two hours of talks with Sinn Féin as “exploratory” and said he hoped they would assist in future negotiations on a programme for government, which could involve more parties.

“Hopefully it’ll help us to set off on the right path,” he said.

Asked if he would be in a position to offer Sinn Féin leader Mary Lou McDonald his party’s support in the next round of voting on a potential taoiseach, Mr Ryan said the Greens were “not ruling anything out”. However, he said it was not in the gift of the party to make that option “viable”.

He said that any viable coalition would need “around 85-plus” votes in the Dáil to provide stable government. A bare majority in the House is 80 TDs.

Sinn Féin has 37 TDs following the February 8th election, the same number as Fianna Fáil after it saw Kildare South TD Seán Ó Fearghaíl re-elected as Ceann Comhairle last week. Fine Gael has 35 TDs, Independents and others account for 21 seats with the Greens holding 12 seats, Labour and the Social Democrats both have six TDs and Solidarity-People Before Profit have five.

Mr Ryan acknowledged that achieving the 85-plus number would require the support of two of the big three parties, but added that the Greens had not ruled out supporting a minority government.

“But it’s very hard to see how it would work on the current numbers. But that doesn’t stop us from talking to Sinn Féin,” he said, adding that the Greens would treat all other parties the same way.

He said that the formation of a government would require a further round of talks, which he hoped would involve several parties coming together.

Mr Ryan declined to be drawn into the row between Mr Varadkar and Sinn Féin over a series of rallies planned by the party to press its case for inclusion in the next government.

Mr Varadkar said that the rallies — which begin in Cork on Monday night — were the “next stage of Sinn Féin’s campaign of intimidation and bullying”.

His comments were rejected by Sinn Féin TD Pearse Doherty as “hysterics”.

“I don’t disagree with the need to bring your people and your members with you. We’ll be doing something similar. We’ll probably hold not just meeting but probably a couple of meetings with our members to get their view, and to make sure they’re informed,” Mr Ryan said.

“So rather than criticising other parties, I’d prefer to concentrate on our own work, our own messaging to our members and the people who voted for us.”