Grand coalition still not adding up for Fianna Fáil grassroots 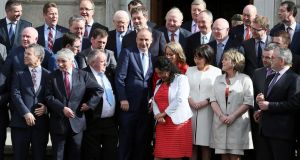 Fianna Fáil leader Micheál Martin with FF TDs as they arrive for the first day of the 32nd Dáil. Photograph: Paul Faith/AFP/Getty Images

They don’t like the term, “grand coalition”, the Fianna Fáil grassroots. There’s nothing grand at all about the idea of serving as a junior partner, or even an equal partner, in a coalition led by Enda Kenny, they reckon.

They can read the Dáil arithmetic, of course. But they contest its most obvious conclusion.

Politics is about numbers, but it is also about more than numbers. It is about culture, history, identity. For some people it is about who you are, and where you come from. For others it is about policy and ideology. For most, politics is about a mix of all those things.

At an operational level, a lot of politics is also about deal-making. And Fianna Fáil, in its history, has been pretty good at deal-making. It has adapted to changing circumstances and turned them to its advantage, cutting deals to achieve, use, retain and share power. So the assumption that Fianna Fáil would again adapt itself to circumstances in 2016 and do a deal with Fine Gael is an understandable one. It is also quite wrong.

A deal with Fine Gael is, for the great majority of ordinary Fianna Fáil members, a deal too far.

In the immediate wake of the election results, on the subject of a coalition between the two big parties, a senior Fianna Fáil figure told The Irish Times: “You guys just don’t understand. The party would just not wear it. And the more they are told ‘You have to do a deal’ the more they won’t wear it.”

“There is no chance of getting a grand coalition through the ardfheis,” says Donal Foley, a long-time activist and the party’s director of elections in Dublin West. “If the leadership tried to force it through, there would be a split.”

A Sunday newspaper article earlier this month suggesting that Fianna Fáil was moving towards a coalition with Fine Gael caused sufficient alarm in the organisation in Monaghan, that at a meeting of the Comhairle Dáil Ceantair a few days later, a motion against any such coalition was adopted unanimously by the 49 people present.

“I think we wanted to make it absolutely clear that there was no way we would be railroaded into anything,” says David Funcheon, chairman of the Monaghan CDC.

Mr Funcheon’s position was repeated again and again by people at all levels of the organisation. “You’d move a mountain quicker than you’d get an ardfheis to support it,” says Keith Henry, a former national chairman of Ógra Fianna Fáil, the party’s youth wing, who has been recently co-opted onto Sligo County Council.

Billy Hayes was the party’s director of elections in Dublin Bay North. He is 64 and has been in Fianna Fáil “since I was a kid. I remember marching up and down the street – ‘Vote vote vote for de Valera’ – and getting a few sweets for it.”

At the recent election count in the RDS, party activists were waiting around, chatting. There is always a lot of waiting around at counts. Making conversation, Hayes asked them their attitude to coalition with Fine Gael. “90 per cent said: ‘we will walk away’,” he recalls.

Again and again, party activists who spoke to The Irish Times brought up the prospect of defections in the event of the so-called grand coalition.

“Listen to what people say at meetings,” says Louise O’Connor, chairwoman of the Galway West CDC. “They say: ‘if that happens, I’m leaving’.”

Miriam O’Callaghan sits in the busy cafe of the Tullamore Dew Heritage Centre. Offaly is a Fianna Fáil stronghold – the constituency is home to some 60 cumainn (branches) – and O’Callaghan is described locally as “pure Fianna Fáil”. She talks about how being in a Fianna Fáil cumann is part of members’ identity. “You feel part of something when you’re in a cumann.”

On coalition, O’Callaghan is polite, and emphatic.

“The members here have a strong view: Fianna Fáil is not compatible with Fine Gael at present,” she says.

Ask why, and you’ll get a variety of responses. But they come under three broad headings.

First, Fianna Fáil promised not to do it. Micheál Martin was asked about it in every interview and he gave the same answer: no coalition with Fine Gael. But what matters more to the activists is that they promised too. They knocked on doors and said to people they wouldn’t join Fine Gael in government.

Secondly, there’s history, identity, culture. Since it was founded, Fianna Fáil has believed itself different to Fine Gael. That belief endures.

It is impervious to analysis of their manifestos, or to the judgments of outsiders. Activists believe they are different and they resent the idea that there is no difference.

“To me Fianna Fáil is what Seán Lemass said it was – the working man’s party,” Billy Hayes says.

Several mention the Labour Party as a more suitable coalition partner. They gloss over 10 years of government with the Progressive Democrats.

“Perhaps we were misaligned in the past,” says Miriam O’Callaghan. But it is true that the things they talk about as the party’s achievements – education, public housing, pensions, welfare – are the priorities of centre left governments. Nobody talks about tax cuts.

For sure, culture changes, and promises can be broken. But the third element of the party’s opposition to coalition with Fine Gael at present will not change for now – it is based on a strategic reading of where the party’s interests lie.

Several activists bring up the prospect of allowing Sinn Féin to lead the Opposition. But perhaps more importantly, they believe that the party’s recovery is not complete, and going into government now would probably arrest it. The party’s plan for recovery was always a two-election strategy and bluntly, they believe Fianna Fáil would be damaged by coalition with Fine Gael.

Catherine Ardagh, a 33-year-old solicitor in Crumlin, is a good example of the party’s recovery. She ran in the local elections in 2009 and got hammered.

But the party backed her: she dug herself into the local community as a “local area representative”, worked hard and won a council seat in 2014.

“I’d totally reject a grand coalition,” she says. “That’s not what we promised people. To be honest, I’d find it sickening.”

Crucially, due to a change in the party’s rulebook, the members have the final say on any coalition deal. They must approve a programme for government in a special ardfheis. Along with the introduction of a one-member, one-vote system, this has helped empower and rejuvenate the organisation.

“We went back to what we used to be – a community-based party. Grassroots members used to feel they had no power. Now the members have the power.”

The notion that the party will be influenced by outside pressure – from other parties, from the media – is viewed with amusement by most activists.

“I heard Olivia O’Leary on RTÉ there the other day talking about why there should be a Fine Gael-Fianna Fáil coalition,” says Donal Foley. “Ah she’s very good, she has her finger on the pulse, alright. But I wouldn’t say she has ever voted for Fianna Fáil.”

Covid-19: People in rural areas should be allowed travel further than 5km - Minister 18:24
Coronavirus: A further three deaths and 47 new cases reported in the State 18:11
Swann says cross-Border cooperation on tracing is ongoing 17:39
Two men charged with facilitating alleged attempted murder of Christy Keane 17:30
Government Minister expresses horror at death of George Floyd in the US 17:28