Governments may have to ‘intervene’ on Haass - Tánaiste 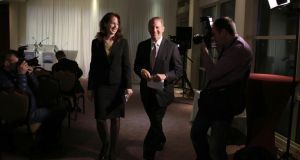 Tánaiste Eamon Gilmore said today that if necessary the British and Irish governments may have to intervene to press ahead with the Haass proposals on parades, flags and the past.

Mr Gilmore told BBC Northern Ireland’s Sunday Politics programme that the two governments were determined not to allow these issues to drift.

“I don’t think there is a very long period of time within which this can continue on. There is an urgency about getting these issues resolved,” the Minister for Foreign Affairs said.

“If necessary we will have to do that, but I hope that it will be possible that the political parties in Northern Ireland will be able to reach agreement among themselves,” added Mr Gilmore. “I think that that’s appropriate, because these are issues that have to be resolved in Northern Ireland.”

The Ulster Unionist Party leader Mike Nesbitt said these comments were “not particularly helpful” while adding that flags and parades were strand 1 issues internal to Northern Ireland and not within the responsibility of the Irish Government.

“They’re internal to the affairs of Northern Ireland and the Republic has no role to play and it’s not useful therefore for Eamon Gilmore to make that sort of a statement,” said Mr Nesbitt.

“Our belief and preference is that implementation should come from the five parties locally but, if that can only happen through joint intervention from both governments then, so be it. In that sense, it is time for unionist parties to step up to the mark and work earnestly towards implementation,” he said.

“I have to say I am frustrated at the failure of political unionism to so far take that leap into a better future. The issues involved in the Haass Talks are not going away. They need resolved,” he said at a Sinn Féin meeting in Guladuff, Co Derry.

“It is simply not tolerable to allow these matters to hold back progress and even worse contaminate the daily business of trying to deliver for citizens who want to see welfare, education, health and other issues to the fore, not those we have spent so much time on over the past 12 months,” he added.

Mr McGuinness also referred to the row last week between himself and Peter Robinson and also the First Minister’s allegation that he hates Orangeism. “There has been a leadership deficit within some sections of political unionism for a long time. There is very important work to do to give all our people the society they deserve. That is the responsibility of every party, not some,” he said.

“Peter says I have a visceral hatred of the Orange Order. This is not true. I want to see the Orange treating its Catholic neighbours with respect. I want to see it upholding law and order. I respect the loyal orders right to march. They do that without incident in my city. That is what should happen everywhere. I am happy to meet the Orange at any time and discuss these matters,” added Mr McGuinness.