Government use of Convention Centre costing €25,000 per day, Dáil told 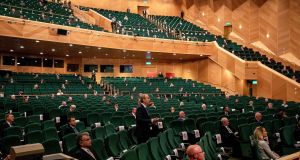 Sittings of the Dáil and Seanad in the Convention Centre in Dublin are “an abject waste of taxpayers’ money”, a Government backbencher has said.

Fianna Fáil TD Marc MacSharry said Leinster House had all the necessary facilities and, with a “pinch of imagination”, the authorities could avoid “needlessly wasting” the daily €25,000 cost to host Oireachtas sittings at the 2,000 seat centre.

He was speaking as the Dáil passed the new Government’s first piece of legislation, after a two-day debate.

The Microenterprise Loan Fund (Amendment) Bill aims to enhance supports to small businesses during the Covid-19 crisis. It provides for increased funding to Microfinance Ireland (MFI) the agency that lends up to €50,000 to businesses with nine employees or fewer that cannot access bank finance.

MFI last week had to suspend loan offers because €16 million or 80 per cent of the €20 million limit had been allocated.

The legislation also increases from €75 million to €500 million the cumulative limit on schemes for small and medium-sized enterprises that are funded through the European Investment Fund.

Mr MacSharry said the savings from the Convention Centre sittings could be used instead to support small business during the Covid-19 crisis.

He said the use of the Convention Centre as an “abject waste of taxpayers’ money”.

Dáil sittings have been held in the Convention Centre because of social-distancing requirements, initially to allow all 159 TDs attend to vote on the appointment of the Taoiseach and the new Cabinet on July 4th.

No rent is charged for the use of the facility but when the centre was chosen in April in the early stages of the pandemic, the daily estimated cost was put at €50,000. The cost has since reduced to €25,000 with a once-off charge of about €110,000 to install microphones.

The Convention Centre is not charging the Oireachtas for use of the building and the costs mainly relate to staffing and broadcast technology.

Those chairing sessions in the auditorium have expressed difficulty in seeing speakers and TDs being late for Dáil debates or missed speaking slots because of meetings in Leinster House.

Mr MacSharry said that in Leinster House, “each of us has our self-incubation unit (office) with a monitor in front of us to watch proceedings and with some will and just a pinch of imagination, we could have a fully functional Oireachtas on the campus where it was intended to be rather than needlessly wasting €25,000 a day down here.

“We have all the facilities required and if we just employed that pinch of imagination, we could all be back up on Kildare Street doing our work as people expect.”

In the debate on the legislation, Minister of State Damian English rejected an amendment by Sinn Féin spokeswoman Louise O’Reilly for loans to be interest free for the first 12 months and to cap rates at 2 per cent thereafter following criticism of the 4.5 per cent to 5.5 per cent rates charged by MFI.

He said the rate had been cut from 7 per cent or 8 per cent to 4.5 per cent and with the six-months interest-free break there is an effective rate of 3 per cent “which is quite manageable for most businesses”.