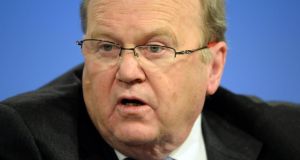 The Department of Finance is pushing back against the clamour for a softer budget next year as the economic recovery picks up.

In a fiscal policy document to be published today the department will also indicate that the improvement in economic conditions does not yet call for a big upgrade in its growth forecasts.

Minister for Finance Michael Noonan will seek Cabinet approval today for a document in which his department says there should be no step back from the plan for €2 billion in tax rises and spending cutbacks in 2015.


Opening position
The Stability Programme Update document, which will be sent to Brussels for the approval of the European Commission, represents the department’s opening position in advance of talks on the preparation of the October budget.

After years of grinding austerity, the Government has billed the 2015 budget as the final round of deep cutbacks and steep tax hikes after years. However, Ministers would still prefer to keep any further retrenchment to a minimum.

The Department of Finance document comes days after the Economic and Social Research Institute think tank said scope may be opening up to reduce retrenchment in the next budget to some €500 million from €2 billion and still meet fiscal targets set by the EU.

The ESRI said last week that the Government may be in a position to achieve a budget deficit below 3 per cent next year, as it is obliged to do under European agreements, by doing nothing more than introducing the new water charge.

At the same time, the institute said the Government should continue to plan for a €2 billion package of tax and spending measures and wait until September to change course if the quickening of economic growth continues.


Unwavering demand
Mr Noonan’s endorsement of the unwavering demand for a €2 billion adjustment next year reflects concern in his department to avoid giving line Ministers the impression that they can slacken the effort to assert control over the public finances.

This conservative approach is mirrored in the department’s update of its own official forecast for economic growth, which is appreciably below the forecast set out last week by the ESRI.

Although the unemployment rate is lower than expected at the start of the year, the Stability Programme Update says a only modest increase in the growth forecast is appropriate at this point.

The document is understood to forecast growth of some 2.1 per cent in gross domestic product, up only slightly from 2 per cent growth forecast set out in the budget for 2014.


Forecast validated
The department’s new forecast has been validated the Fiscal Advisory Council, a formal body set up in 2011 to monitor fiscal policy. By contrast, the ESRI report last week forecast a 2.6 per cent expansion in GDP this year.

At its meeting today the Cabinet is also expected to sign off on legislation to introduce free GP care for children under the age of six.