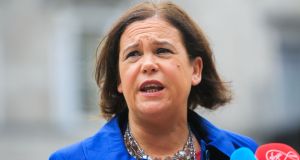 The Government has failed to produce its plan for the provision of social and affordable housing despite repeated commitments to launch it in September, Sinn Féin has claimed.

Party leader Mary Lou McDonald accused the Government of a policy of “mañana mañana” (the day after tomorrow) and told Taoiseach Micheál Martin that “putting everything on the long fingers seems to be one of the hallmarks of your chaotic Government”.

Referring to the Economic and Social Research Institute’s (ESRI) latest report highlighting the need for the State to deliver affordable housing, she said Minister for Housing Darragh O’Brien “spent the entire summer telling everybody that the Government’s housing plan is on the way” and that he would announce details of the new affordable housing scheme in September.

“Today is the last day of September, and hundreds of thousands of working people want to know where is the Government’s affordable housing plan?”

The delay was not good enough for people who are in extraordinarily difficult and precarious position, some “in the box room of their mother’s home sometimes with their own children”.

Mr Martin said the Minister was however “very quick off the mark with the July stimulus, with more than €40 million allocated to bring 2,500 social housing units back into play”. They will be allocated to people on the housing list before the end of the year.”

The money went to local authorities and “that was quick action”.

Mr Martin agreed with the ESRI that “we need to build more social and affordable houses, to have a strong social housing programme by the local authorities and approved housing bodies”.

“That is something the Government will be targeting and identifying in relation to the estimates for next year”.

He pointed out that in the ESRI report “they’re actually saying in the short term, that affordability has actually improved over the last number of months” because of the “extraordinary fiscal measures” introduced by the Government.

He said that in the medium term there is significant demand. “And we take that very seriously indeed and we already know that Covid-19 has negatively impacted on the building programme because of the lockdown” and 16,000 houses as opposed to the expected 24,500 houses would be built by the end of the year.

Ms McDonald said, however they were promised an affordable housing plan in September and judging from Mr Martin’s response “I can only conclude that no such plan exists”.

“This policy of mañana, mañana and putting everything on the long finger seems to be one of the hallmarks of your chaotic Government, but it is not good enough.”

The Taoiseach said Sinn Féin “talk a lot” about housing, employment and affordability but “much of it is without substance”.

He said there had been extraordinary fiscal interventions by Government,€40 million had been provided in July alone for 2,500 units. The Government is committed to delivering social and affordable housing.

“Historically, we did it before as a party and we are committed now to delivering social and affordable housing. That will be clear both in the budget and in the time ahead.”