Taoiseach, Tánaiste and Ryan: EU Commissioner should have limited movements for 14 days 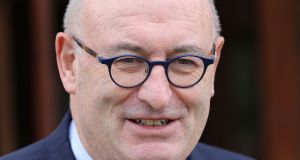 Phil Hogan has been under pressure since attending an Oireachtas Golf Society event in Co Galway. File photograph: Nick Bradshaw

The Taoiseach, Tánaiste and Green Party leader say “concerns remain” over the public account provided by EU Commissioner Phil Hogan on his movements when he travelled to Ireland.

The three Government party leaders said in a statement that “it is clear that breaches of public health guidelines were made by Commissioner Phil Hogan since he travelled to Ireland.”

The leaders said that Government guidelines “clearly required him to restrict his movements for 14 days. He should also have limited his movements to and from Kildare for essential travel only, and he should not have attended the Oireachtas Golf Society dinner.”

“People are correctly angered by these actions given the sacrifices so many have made to adhere to public health guidance. In addition, his delayed and hesitant release of information has undermined public confidence,” the leaders said in a joint statement issued shortly after 9pm on Tuesday.

The leaders said that they await the outcome of the review being undertaken by the President of the European Commission Ursula von der Leyen to whom Mr Hogan must account.

They noted that Mr Hogan is ultimately accountable to the EU Commission, not to the Government or to the Oireachtas.

Earlier it emerged Mr Hogan made a social visit in Co Roscommon on August 17 that was not disclosed in the itinerary of his movements published by the European Commission.

The Irish Times understands that Mr Hogan paid a social visit in the county on the day in which he travelled from Co Kilkenny to Co Galway via Co Kildare.

Mr Hogan played golf in Clifden on the following two days before attending the controversial dinner of the Oireachtas Golf Society at which over 80 guests attended in an apparent breach of Covid-19 guidelines.

The Commissioner first gave an account of his movements to his boss Commission President Ursula von der Leyen on Sunday but was asked for clarifications.

A spokesman for the Commissioner told the Irish Times “If he was in Roscommon, I fail to see its relevance.”

On Tuesday Mr Hogan published an itinerary of his movements that did not include the Roscommon visit.

The Commissioner said the itinerary demonstrated he had “adhered... at all times” to coronavirus regulations while in Ireland.

However, according to the itinerary Mr Hogan stopped self-isolating and went golfing in Co Limerick before the end of the 14-day period in which he should have been in quarantine as an arriving traveller from Belgium.

Mr Hogan wrote that he did not need to complete the quarantine as he “received a negative Covid-19 test” on August 5, however according to the HSE this does not apply to incoming travellers.

The advice by the Citizens Information service cited by Mr Hogan applies to people ordinarily resident in Ireland who are concerned they have Covid-19 and self-isolate before they get a test. Once such people test negative, they can end their 14-day isolation, the advice reads.

Earlier in a timeline of his movements published by Mr Hogan on Tuesday he told Ms von der Leyen that he did not breach the terms of the lockdown in Kildare because his travel in and out of the country was covered by the “reasonable excuse” provision of the public health regulations.

“To my best understanding, my justification for entering County Kildare to obtain essential working documents or to get my belongings for the purpose of returning home to Brussels constitutes ‘a reasonable excuse’ under the regulations,” he says.

“At all times during my brief presence in Kildare over the period, I followed public health guidance.

“When in Kildare, I was either moving through the county or momentarily there with a reasonable excuse and consequently I was not in breach of the Covid-19 restrictions imposed.

“To the best of my knowledge and ability I believe that I complied with public health regulations in Ireland during my visit.”

Mr Hogan has been under pressure since he attended the golf society dinner in Clifden in apparent breach of public health guidelines. The timeline published by him states that he played golf on three occasions between August 13th and August 19th.

Regarding his observance of the quarantine requirements, Mr Hogan said that he had tested negative for Covid-19 while in hospital for a medical procedure and therefore was not “under any subsequent legal requirement to self-isolate or quarantine”.

When contacted by the Irish Times on Tuesday, the HSE Live Coronavirus information line said that incoming travellers must self-isolate for 14 days regardless of any negative test result as the disease could still be incubating at the time the test is taken.

“A test is only a point in time,” the adviser explained. “So I’m afraid the 14 day (quarantine period) still stands regardless of testing negative or not.”

The commissioner cited a section of the ‘Testing for Covid-19’ page from the Citizens Information website in his dossier, which applies to ordinary residents in the State. This page contains advice for those who suspect they have Covid-19 and explains the procedure for getting a test.

It advises anyone with symptoms to isolate for 14 days. “If you have tested negative for Covid-19, you will receive your results by text message. You do not have to self-isolate any longer”.

By travelling to Adare in Limerick to play golf on August 13th, Mr Hogan would appear to have breached this advice.

Mr Hogan also says that the Oireachtas golf dinner was not covered by the tightened restrictions - reducing the numbers permissible at an indoor event to 15 - announced on August 18th because the statutory instrument giving effect to the change was not made available until after the dinner on August 19th.

“In reality this means that the dinner did not come within the remit of the new rules agreed on 18 August,” he says.

He says he was “assured by the organisers and the hotel that it was being held in full compliance with all relevant Covid-19 rules”.

“I had no reason to question or doubt that assurance, particularly in circumstances where an Irish Government Minister was attending and speaking at the event. Again I now recognise that the event should not have proceeded and I should not have attended,” he says.

Mr Hogan’s response indicates that he will attempt to tough it out in the face of calls in Ireland to resign. His account of the matters is now being considered by the office of Dr von der Leyen.

The Government and the European Commission have suggested that Mr Hogan should take questions in public to account for his actions.

The dossier submitted by Mr Hogan included details on the local coronavirus restrictions in different counties, advice from the Irish Hotels Federation, and a map of Ireland.

The Government is awaiting the judgment of Dr von der Leyen on the dossier supplied by Mr Hogan to her office. Sources said there is particular focus on whether Mr Hogan violated the terms of the local lockdown in Kildare, which began at midnight on August 7th.

Initial statements provided by his spokesman claiming Mr Hogan travelled “directly” from Co Kilkenny to the event in Co Galway have since proven incorrect. Mr Hogan’s team has said that he returned to Co Kildare, where local lockdown measures are in place, on his way to the golf event to collect items from his residence at the K-Club. He was stopped by gardaí in the county for using his mobile phone while driving.

European Commission spokeswoman Dana Spinant said it was “premature” to discuss any potential sanctions on the commissioner and whether Dr von der Leyen could ask him to resign.

Meanwhile the owner of the Clifden hotel which hosted the controversial dinner, to mark the Oireachtas Golf Society’s 50th anniversary, has said he will be making “zero comment” on the debacle.

Galway businessman John Sweeney, who owns the Station House Hotel, said he was “saying absolutely nothing” in response to the political storm that has erupted over the event.

“At the appropriate time the hotel will have something to say,” he told The Irish Times.

Mr Sweeney is a well-known Galway businessman and hotelier, and he was part of a consortium that previously acquired Dublin’s five-star Shelbourne Hotel in 2004. However, his business interests were severely hit during the economic crash.

His name was listed on the seating plan for the dinner, and other guests included Fianna Fáil TD Dara Calleary, who resigned as minister for agriculture over the controversy; Supreme Court judge Séamus Woulfe; and a host of former and sitting Oireachtas members – predominantly from Fine Gael and Fianna Fáil.

The Supreme Court has asked former chief justice Susan Denham to review whether Mr Justice Woulfe should have attended the dinner.

The three-course dinner rounded off two days of golf at Connemara Golf Club in Ballyconneely. There had been a divider in place splitting the function room, and the divider was pulled back during a series of speeches at the event.

Previous limits allowing up to 50 people to attend indoor gatherings had been reduced to just six people as part of measures announced by the Government in response to a rise in Covid-19 cases the day before the dinner.