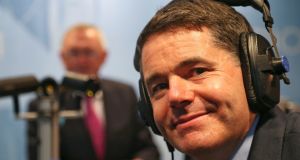 The Government faces an embarrassing Dáil defeat on Wednesday over its decision to stand over a rule on pensions that has resulted in thousands of women getting reduced payments.

Last week, Minister for Finance Paschal Donohoe accepted a rule change in 2012 had impacted on the pensions of an estimated 35,000 women who had taken time out from the workforce before 1994, or worked part-time.

Describing the situation as “bonkers and unbelievable”, Mr Donohoe accepted that their pensions were reduced, and many would not be entitled to receive the full €5 weekly increase announced in the budget. However, he said he did not have the resources to make good on the anomaly.

The rule change was made by then minister for social protection Joan Burton in 2012.

The Government’s stance will be challenged in the Dáil when Fianna Fáil tables a motion calling for full pension entitlement to be restored to the women affected.

The motion has been brought forward by the party’s social protection spokesman Willie O’Dea. He said he has yet to speak to other parties but even in the absence of such contact, it is likely all the non-Government parties will back the motion.