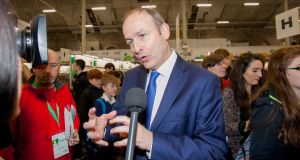 Increasing Fianna Fáil frustration over Opposition proposals not being taken seriously by Government risks undermining the stability of the minority administration, party figures have warned.

Fianna Fáil is to ask the Dáil reform committee, chaired by Ceann Comhairle Seán Ó Fearghaíl, to carry out a review of how the House operates because of growing unhappiness among its TDs.

A confidence and supply agreement, in which Fianna Fáil said it would support Fine Gael and the Independent Alliance in votes on certain matters, facilitated the establishment of a minority Government after last year’s inconclusive election result.

However, one Fianna Fáil source said the “usual pattern” for the end of such agreements was that people get “fed up with the whole thing”.

Some senior TDs, frustrated with how the arrangement is operating, urged the party leadership before Christmas to go for an early election but Fianna Fáil leader Micheál Martin last week told deputies the deal would remain in place for another two budgets.

Privately, however, Fianna Fáil figures, as well as some in Fine Gael, expect the negotiation of the next budget to be more fraught and bruising than last year with many feeling that an election in 2018 is a serious possibility.

Due to its minority status, the Government does not have the Dáil strength to vote down Bills tabled by the Opposition. It has allowed a number of Bills pass some stages in the Dáil and partially proceed along the legislative process. Fianna Fáil sources say no further progress is then made, with Bills getting bogged down in Oireachtas committees.

It is claimed that some Bills tabled on justice matters “fell into the abyss”.

“The whole process is backed up,” said a source, adding that it was fault of both the Government and the parliament as a whole.

Fianna Fáil is to request that the Dáil reform committee carry out a review, which it believes should be under way by the one year anniversary of the formation of the Government in May.

It has also requested a status update on all Bills that have been tabled by the Opposition.

“People are agreeing in principle but no Bill is then produced at the end and no legislation is being passed,” a source said.

“As a national parliament, have we come to this? It makes a mockery of the parliament. It isn’t a council chamber.”

Ministers have also criticised the standard of legislation being brought forward and claim some Bills are flawed and cannot be enacted.