TD is ‘baffled’ by Government’s ‘illogical’ approach to mineral exploration 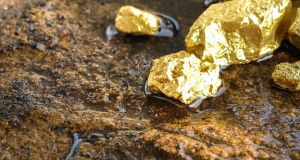 The Government’s policy on mineral exploration is “illogical”, a TD has told the Dáil, after a Canadian company applied to renew licences for prospecting gold and other minerals in conservation areas in Connemara, Co Galway.

Fianna Fáil TD Éamon Ó Cuív told the Dáil that the policy of banning prospecting in national parks and Croagh Patrick in Co Mayo should be extended to conservation and natural heritage areas, including the Cornamona and Maam valleys in Connemara, close to Lough Corrib.

The Galway West TD, who lives in the Cornamona valley, said Lough Corrib and much of the land around it are special areas of conservation for plants and wildlife under EU directives.

In March this year Gold Note Minerals, part of the Canadian BTU Metals Corporation, applied to renew three prospecting licences it has held since 2013 in the area.

Mr Ó Cuív said 80 per cent of Connemara is either a special area of conservation for animals and plants or a special protection area for birds “and an awful lot of it is both”.

He was “baffled” that the issuing of mining licences would even be considered in such an area.

Minister of State for Environment Seán Canney said the licence is for prospecting only and does not give the licence holder permission to mine.

Mr Canney said the process involves a public consultation and a number of submissions were received raising concerns about damage to the environment, the threat to tourism and to farming. There is also an online petition with more than 5,000 signatures, he said.

He said that a screening process is involved for special areas of conservation and special protection areas and “there is a good suite of hurdles to be jumped before a prospecting licence is granted”.

Mr Canney also said that in certain exceptional cases prospecting is allowed in national parks where it might enhance knowledge of the area.

But Mr Ó Cuív insisted that companies do not look for prospecting licences just to add to the geological knowledge of the area and “must believe that they will get a mining licence” if minerals are found.

He said that “rationally and logically” mining would not be allowed because of the “incredibly sensitive ecology of the area” and the many laws and regulations that apply, including water controls, planning policy and environmental impact rules.

But, he said, mining companies are powerful entities and communities in the area are very concerned at the potential for granting a mining licence if enough mineral deposits were found.

A decision on the renewal application “is expected in the coming weeks”, the Minister said.

BTU Metals Corporation in Vancouver, Canada has been contacted for a response.