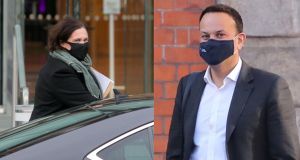 Sometimes, politicians in the Dáil can rail angrily at others in the chamber, without obvious rhyme, or reasons. Sometimes, however, they are acting in unison to a battle plan.

On Tuesday, during the confidence debate faced by Tánaiste Leo Varadkar, one Fine Gael TD after another let loose against Sinn Féin. The attacks confirmed a deliberate shift in its parliamentary strategy.

Speakers were given explicit instructions by the party leadership to attack Sinn Féin at every turn, excoriating the party for its secrecy, its links with violence and alleged double-standards between the South and North.

Equally, they zoned in on Sinn Féin’s decision to transfer a €4 million bequest made by an English man who spent years living in a caravan to its Northern Ireland branch, so that the money did not fall under the Republic’s spending rules.

“The gloves have come off,” said a senior Fine Gael figure, noting the ferocity of the criticism from Border TDs such as Heather Humphreys from Monaghan and Joe McHugh from Donegal.

For a long time, Fine Gael TDs in those counties, and elsewhere had bitten their tongues when it came to Sinn Féin, believing that the powers-that-be preferred otherwise, but no more.

Humphreys, in particular, did not spare timber.

Sinn Féin, she said, is a party of “multiple mysterious bank accounts” that has the gall to accuse Government of burying records when IRA victims are still buried without a gravestone, leaving families mourning.

There was a lot more in that vein. Sinn Féin was not a passive recipient, either. Leader Mary Lou McDonald, Matt Carthy and Pearse Doherty all let fly, with McDonald labelling Fine Gael (and Fianna Fáil) as part of an old boys’ network.

It is not that Sinn Féin and Fine Gael have not clashed in recent months – they have – but it has been sporadic and infrequent. What is happening now is different, though.

The bitter clashes of the latter stages of the election where both traded insults on an hourly basis were followed by a period of relative calm as the island faced up to the Covid-19 crisis.

But lately the thin patina of collegiality disappeared: “Sinn Féin had an opportunity to prove itself as a constructive Opposition,” said the Fine Gael source. “This week we took a deliberate decision to call out their hypocrisy.”

Fine Gael believes Sinn Féin tabled the Varadkar motion to deflect from their own difficulties in the North over the erroneous payment of £30,000 in Covid-19 supports to three of its offices by a Stormont department. The money has been repaid.

Frequently, it was hard to keep up with the volume of insults traded between the parties. Soon, the battle transferred outside the Dáil chamber onto social media.

Sinn Féin brought up, too, the case of Michael D’Arcy who spontaneously went from being a Fine Gael minister to a financial lobbyist. On Thursday, Doherty was able to give an example of what Sinn Féin portray as a classic insider when a former Fianna Fáil senator, Geraldine Feeney, who lobbied for the National Association of General Practitioners, was appointed to the Standards in Public Office Commission. “You could not make it up,” said Doherty.

The sledging on Twitter, of course, brought in the shouty army from both sides, with threads running to hundreds of high-decibel insults.

“If you look at the Dáil record we consistently raised the issue and it should not have been a surprise we took the motion,” said a Sinn Féin source.

“As far as we were concerned it was Fine Gael trying to muddy the water by attacking us. We are the main Opposition party and our job is to hold the Government to account especially when there are incidents like this.”

Promising “robust opposition”, Sinn Féin believes it is needed: “We have not had it for five years, because of confidence and supply, and because of Covid. It’s a reversion to more traditional politics.”

Each party can attack the other without losing support, since the overlap between is tiny, if it exists at all. Equally, both of them have the clearest brand identities, so that helps, too.

It is all more complicated for Fianna Fáil which is just getting to grips with being back in power. It has taken the occasional pot-shot at Sinn Féin but it is not a strategy.

“Spats in parliament are fine in a heated political debate but it doesn’t necessarily butter any spuds. Nor does it resonate with people outside the bubble,” declared a Fianna Fáil figure.