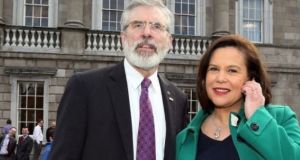 Sinn Féin leader Gerry Adams has insisted he will lead the party into the next general election.

Speaking as he unveiled his new frontbench team, Mr Adams said he made a mistake on Newstalk radio when he suggested he may not be leader when the next election comes.

Asked about it on Wednesday Mr Adams said he “made a mistake” and said he would lead the party.

The Louth TD has been leader of Sinn Féin for 33 years and was recently re-elected at the party ardfheis.

Mr Adams insisted nobody had been demoted and he had chosen the best team to shadow the Government,

Asked how long he expected the current regime to last Mr Adams said: ““I don’t know. Sometimes a government not expected to last can last much longer than expected.”

Jonathan O’Brien: justice and equality and drug and alcohol abuse