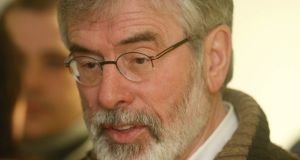 Gerry Adams: “The bizarre musings of some columnists will not undermine the democratic prerogative of the Sinn Féin membership who elect our leadership at our ardfheis”

Sinn Féin leader Gerry Adams has insisted he will lead the party into the general election.

The Sunday Independent reported this weekend that Mr Adams was considering stepping down as leader in the run-up to the election.

However, the Louth TD said in a statement: “The Sunday Independent’s persistent vitriolic presentation of Sinn Féin is nothing new, and their crass attempts to suggest that I will step down as party president in advance of a general election are simply untrue.

“Despite their best wishes I’m going to lead Sinn Féin into the next general election.

“The bizarre musings of some columnists will not undermine the democratic prerogative of the Sinn Féin membership who elect our leadership at our ardfheis.

Mr Adams has come under criticism in recent weeks for his support for Thomas “Slab” Murphy, who has been convicted of tax evasion.

The party leader said Mr Murphy has been treated “unfairly” following his conviction by the non-jury Special Criminal Court.

Murphy (66), of Hackballscross, Co Louth, was found guilty by the three-judge Special Criminal Court of failing to furnish tax returns for nearly a decade from 1996.