Gardaí yet to speak to doctor given document by Varadkar

Dublin GP, a friend of the Tánaiste’s, was then the president of a rival medical organisation 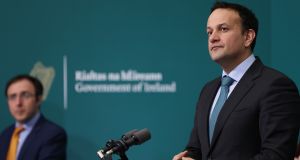 Gardaí have not yet spoken to Dr Maitiú O’Tuathail, the doctor who received a draft of a newly negotiated general practitioners’ contract from then taoiseach Leo Varadkar in April 2019.

Gardaí are making preliminary inquiries into the controversial leak by Mr Varadkar.

The Dublin GP received the document of the provisional new contract between the Department of Health and the Irish Medical Organisation (IMO) in April 2019, soon after substantive negotiations had concluded.

Dr Ó Tuathail, a friend of Mr Varadkar’s, was then the president of a rival organisation, the National Association of General Practitioners (NAGP).

There is no suggestion Dr Maitiú O’Tuathail has committed an offence.

It emerged over the weekend that then minister for health Simon Harris spoke to detectives about the matter in January this year and provided a written statement. He has made no comment on the contact with gardaí. There is no suggestion Mr Harris has committed an offence.

Mr Varadkar’s legal representatives have also been in contact with An Garda Síochána but the Tánaiste has yet to speak to detectives.

The Fine Gael leader said on Sunday that he is willing to meet gardaí and provide a full statement on the circumstances surrounding the leaking of a copy of the document.

The Tánaiste has said his legal advice is that he has “committed no offence”. He said: “I am aware that a complaint was made against me last November. This was widely reported at the time.”

It is understood that no criminal investigation has been opened into the incident but that detectives are conducting what has been described as “preliminary inquiries” into whether or not an offence has been committed under the Official Secrets Act.

It is understood Mr Varadkar will be contacted by detectives over the next few weeks as part of the exercise.

Yesterday, Fine Gael TDs talked down the latest controversy, saying such an examination was always expected. One TD, speaking on an off-the-record basis, said it would have little impact, or implication for the Tánaiste, unless new information emerged that elevated it to a full investigation.

Village magazine reported in October that Mr Varadkar leaked the document to Dr Ó Tuathail in April 2019 and it has been alleged that conduct was improper. Mr Varadkar has insisted he acted appropriately at all times.

The contract contained the provisional agreement that had been reached between the Department of Health and the IMO on a new GP contract.

The Government won a confidence motion in Mr Varadkar on the issue by 92 votes to 65 in Novemeber last year. At the time Mr Varadkar said he recognised his actions were “not best practice”, but said he had nothing personally to gain from the leak and said he did so in order to secure backing for the deal from all GPs.