‘When I saw her coming towards me I thought she was Avril Lavigne at first’, Tánaiste says 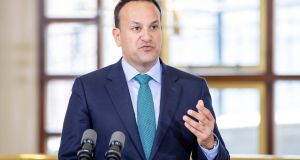 Speaking at Government Buildings, Tánaiste Leo Varadkar said he hadn’t yet spoken to the gardaí about the incident. Photograph: PA

Gardaí are investigating an incident during which a woman threw a smoothie over Tánaiste Leo Varadkar in Dublin city centre on Friday.

In a video circulated on social media, a woman holding a skateboard approaches Mr Varadkar while he is recording an interview with a camera crew in Merrion Square.

The short video shows the woman walk up to the camera crew and pause, before throwing a drink over the Fine Gael leader, and then turning and running away.

Commenting on the incident, Mr Varadkar said: “When I saw her coming towards me I thought she was Avril Lavigne at first, because she had the skateboard.” A reference to popstar Avril Lavigne, known for her 2002 hit song Sk8er Boi.

“But unfortunately [she]wasn’t and also had a smoothie, which ended up all over my face and halfway down my suit,” he said.

In a statement, a Garda spokesman said gardaí “are investigating an incident that occurred in Merrion Square today, 18/09/2020, at approximately 3pm”.

Mr Varadkar said he had been filming a video to explain additional Covid-19 restrictions to come into force in Dublin on Friday.

“We got it finished thankfully, and that will be posted later this evening,” he said. “I had a spare suit and got on with the day’s work.”

“I haven’t spoken to the gardaí yet, but I believe they want to speak to me, but that’ll be next week,” he said.

Responding to queries around the level of security afforded to senior politicians he said: “I still have a Garda driver, but I don’t have any security detail as such, I don’t think one incident would justify that quite frankly.”

Labour Party TD Aodhán Ó Ríordáin described the actions as “bang out of order” and an example of “cowardly nonsense”.

In a post on Twitter he said: “Ireland is a democracy where politicians are accessible and freely mingle with the people. If this is your way of expressing your viewpoint, you need to reassess your argument,” he said.