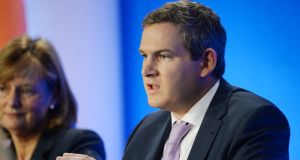 Seán Kyne: his advise to Joe McHugh is to keep practising and speaking with as many different people as possible. Photograph: Alan Betson / THE IRISH TIMES

New Minister for Gaeltacht Affairs Joe McHugh could learn an Irish lesson or two from his party colleague in Galway West. Seán Kyne, the last TD to be elected in the 2011 general election after two recounts, made it to the Dáil by a mere 17 vote margin.

He said if he had not learnt the first official language to a reasonable degree of fluency he would not have been elected in that Gaeltacht area.

Asked what he thinks of the pledge by Taoiseach Enda Kenny to the Dáil that new Minister of State Joe McHugh would be fluent by the time the House returns in September, he replied: “I hope he is.”

Comedian Des Bishop learnt the language – making a TV series along the way, he added. It can be done but he acknowledged that “it’s a strong target to meet”.

So what advice would he give the studious Minister? “Keep practising and speaking with as many different people as possible,” he said.

Mr Kyne is a classic “school Irish” scholar with a D1 in honours Irish at the Leaving Cert. “You put down the pen from the second paper in Irish in the Leaving Cert and that’s it, apart from occasional conversations and on holidays abroad when you might use it,” Mr Kyne said.

He learnt a big lesson after the 2007 general election, however. Mr Kyne is from Moycullen, a Gaeltacht area, although not a particularly strong one. He was the official Connemara Gaeltacht candidate.

“And I had no effort made to learn Irish,” he said. He failed to win a seat. “It was a big wake-up call.”

He started going to meet retired teacher and native speaker Máire Hernon for an hour, sometimes two or longer, once or twice a week.

“We’d pick a topic and words and just basically chat about things and do readings,” he says.

Then a local journalist asked him for an interview through Irish, which lasted 12 minutes, was edited to five and broadcast. “And I got a lot of kudos at the time.”

He canvassed in Gaeltacht areas and people told him “fair play to you” for making the effort. More interviews on Raidió na Gaeltachta and TG4 followed. “I did interviews and thought, ‘Was I terrible?’ and I probably was but people were pleased that I made the effort.”

He went on to win the Dáil seat. Mr Kyne doesn’t consider himself fluent – although Irish speakers say he is good – and has to look up words for debates on particular topics, but he tweets in English and Irish and speaks in Irish in the Dáil on Gaeltacht issues.

He acknowledges that there has been some annoyance about the appointment of non-Irish speakers to the Department. “But whether we like it or not Joe will be making the decisions that affect Connemara and we have to work with him,” he said.

He also said the Minister “has started a lot of people thinking about Irish again and maybe they will join him on his journey. I know that I got a lot of kudos from proficient Irish speakers and I’m sure Joe will too.”