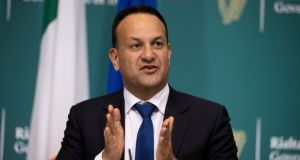 Tánaiste Leo Varadkar said for many the pandemic payment they received, which ranges from €203 to €300, represented either the full equivalent of their wage or 86 per cent. File photograph: PA Wire

Further cuts to the pandemic unemployment payment may not go ahead in January if the State is “still in the teeth of” the Covid-19 pandemic, the Tánaiste signalled.

Leo Varadkar said budget contingency funding allowed for flexibility on cuts to the payment, put in place in March to deal with the tsunami of job losses caused by the pandemic.

Mr Varadkar acknowledged that the move to Level 4 restrictions was a “bitter blow” to hundreds of thousands of people in Cavan, Monaghan and Donegal but he said the vast majority why it was necessary given the high incidence of the virus.

The three counties move to Level 4 at midnight on Thursday and Mr Varadkar warned people in other counties “should not take any comfort” from the fact that restrictions are higher in these three counties because the virus is circulating in every part of Ireland and everyone needed to change their behaviour.

Sinn Féin finance spokesman Pearse Doherty who appealed to the Tánaiste to reverse the € 50 cut in the top € 350 level of the pandemic payment because thousands of workers in the three counties would lose their jobs.

Mr Doherty said there was a “glimmer of hope” in Donegal because of a fall in cases in the county but it was far too early to see it as a trend.

The Donegal TD also called for additional financial supports and said the cuts to the pandemic payment had to be reversed.

“We can get through this but only if the support is there to help people through it”.

He said the cuts to the payment were short-sighted and that the person on the highest level of €300 a week was earning well above €500 pre-Covid.

Mr Doherty said the Government was determined to cut the payment by €50 in January and again in April.

Hundreds of thousands of people could lose their jobs but still needed to pay their rent and other bills. Appealing for adequate income support, Mr Doherty said these families needed certainty about their income when they were losing jobs because of Government restrictions.

The Tánaiste said the Covid restriction subsidy scheme would start next week involving a weekly payment for businesses closed by the restrictions.

The employment wage subsidy scheme would come into effect for any company losing more than 30 per cent of its business and commercial rates have been waived until the end of the year.

Mr Varadkar said that for many the pandemic payment they received, which ranges from €203 to €300, represented either the full equivalent of their wage or 86 per cent.

He acknowledged that there were people who earned much more than €300 a week but he said “it’s a scheme that has to be affordable”.

Any further reduction in January “will be kept under review”. He said they had set aside contingency funds in the budget to allow them to extend that January deadline if we’re still in the teeth of the pandemic.

“So that flexibility is open to us to extend that deadline and we will give that consideration.”