Any sanction to be decided after ethics group’s recommendation, says Ceann Comhairle 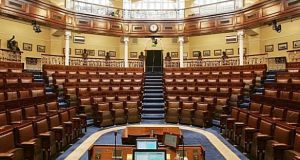 Mayo TD Lisa Chambers said she had learned from her mistakes and ‘I am genuinely sorry’.

The four Fianna Fáil TDs involved in the controversy over voting have apologised in the Dáil.

They expressed their regret in turn after Ceann Comhairle Seán Ó Fearghaíl said any sanctions would be issued by the House.

Following a complaint under the Ethics in Office Act the ethics committee is conducting its own investigation. When its inquiry concludes a recommendation about sanctions will be made issue and the Dáil will then consider this.

Former communications spokesman Timmy Dooley apologised to the Ceann Comhairle “and to every member of this House”.

He apologised for “the fact that when I spokes to deputy Collins I gave him the impression that I would be in the chamber” for voting throughout the voting block.

He said he did not ask Mr Collins to vote for him or tell him that he would not be in the chamber.

“I accept and regret that my conduct has led to a controversy that is unwelcome to this House.” He said he should have been there for the voting block because it is one of the most important parts of our function as a TD.” He said his attendance in general for voting was good.

He said “it would never be my intention to bring such negative undue attention to our work here”.

They all understood the immense privilege it was to serve in the House and “and to the people of Limerick and the wider public I offer my sincere apologies too”.

He voted for Mr Dooley “in the mistaken belief that that he was still in the chamber. He said it was wrong and I fully accept that I should not have done so.”

Mayo TD Lisa Chambers said she had learned from her mistakes and “I am genuinely sorry”.

She said she inadvertently sat in party colleague Dara Calleary’s seat to vote and pressed the button in error on the first vote. She moved to her own seat to cast her own vote.

The vote was lost by a large number and I did not tell the teller at the time “as I genuinely thought it was an insignificant error”.

“I fully accept that I should have done so at the time and I sincerely apologise in this House and to the public for not doing so.”

Ms Chambers added that “mine was a genuine mistake and not something I intended to do and I apologise for the manner in which I handled it”.

He said that when the votes were called he was seated in deputy Collins’s seat and “I voted for him and he for I”.

Mr Cowen apologised for “this informality and carelessness on my part”.

He said that carelessness allowed the integrity of the voting system to be questioned. “I should have sat in my own seat and I should have cast my own votes. I want to assure the House and the people of Offaly who elected me” that he would play his part in ensuring that the recommendations of the report are implemented.