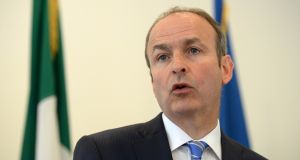 Fianna Fáil leader Micheál Martin told his party’s TDs that Government and Opposition party leaders had agreed the byelections would be held in the last week in November. File image: Dara Mac Donaill / The Irish Times

The four pending Dáil byelections look set to be held in the last week in November, with TDs pencilling in Friday 29th as the most likely date.

Fianna Fáil leader Micheál Martin told his team of senior TDs that various party leaders held a meeting on Monday night at which the timing of the byelections in Wexford, Dublin Fingal, Dublin Mid West and Cork North Central was discussed.

They are being held to fill the vacancies created by the election of Mick Wallace, Clare Daly, Frances Fitzgerald and Billy Kelleher to the European Parliament earlier this year.

Although Mr Martin did not give his TDs an exact date, he said they would be held in the last week in November. Friday, November 29th, is seen as the most likely date since Irish elections and referendums are usually held on a Friday.

There was some loose speculation in Leinster House, on the first day the Dáil returned after the summer recess, that this could be the date of a potential general election if a Brexit deal is struck and Taoiseach Leo Varadkar decides to go to the country.

However, other TDs said this was a “gargantuan if”, given the current state of play in the Brexit talks, with significant gaps remaining between the EU and UK.

A general election must be held within 30 days after the dissolution of the Dáil and polling day must be between the 18th and 25th day, excluding Sundays, after the writ is moved.

The same procedure applies to a by election as it does to a general election, in that polling day must be between the 18th and 25th day after the writ is moved.