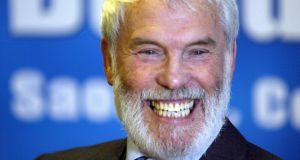 Tributes have been paid to former Sinn Féin MLA Francie Brolly who died suddenly at his home in Dungiven, Co Derry, in the early hours of Thursday.

A lifelong republican, Mr Brolly – father of GAA pundit and ex-player Joe Brolly – was a former councillor and represented East Derry in the North’s Assembly from 2003 until 2010.

He later resigned from Sinn Féin in opposition to its stance on abortion, and in 2018 became a founder member of Aontú. He stood unsuccessfully for the party in the North’s council elections last year.

The North’s deputy first minister and Sinn Féin deputy leader, Michelle O’Neill, said Mr Brolly was a “significant figure in the political life of east Derry for many years and will be missed by many.

“As a teacher, activist, campaigner and elected representative, he helped shape the community in his native Dungiven and further afield.”

“He was a lovely man of great warmth and fun. He had tremendous political insight and he stood up for his principles.”

Mr Brolly is survived by his wife Anne, and children Joe, Proinnsías, Conal, Áine and Nollaig.