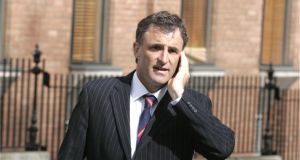 Mr Andrews, who left Fianna Fáil in August 2012, said the decision to move to a new party was not an easy one.

“My family has been involved in Fianna Fáil since its foundations, but it has become very clear to me that the party no longer represented the ideals or values of its founders, including my grandfather,” he said.

“I have joined Sinn Féin because I firmly believe that it is genuinely committed to pursuing the political, social and economic change that Ireland now requires.

“My decision has been influenced by my first-hand experience of Sinn Féin’s work at community level, its role in the peace process, its strong commitment to a united Ireland and its track record on international solidarity.”

“Both Chris and I have worked on campaigns together and indeed were shipmates on the 2008 and 2011 freedom flotillas to Gaza,” he said.

“I have known Chris for a long time and regard him a person genuinely committed to building a better country for all our citizens.”