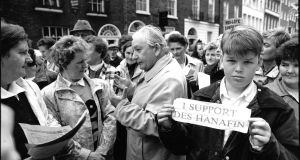 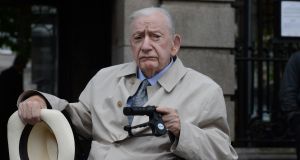 Former Fianna Fáil Senator Des Hanafin has died at the age of 86.

Born in Thurles, Co Tipperary, he and his wife Mona had two children, Mary and John.

Des Hanafin was committed to socially conservative causes. He was a leading anti-divorce campaigner and an anti-abortion activist.

In May 2015, he wrote an opinion piece for The Irish Times accusing the Fine Gael/Labour Government of adopting a “dictatorial attitude” to the marriage equality referendum in which he said he was voting No.

A former councillor, he became a senator in 1965 and remained in the Upper House until 1993.

He was also a businessman, running the Anner Hotel in Thurles in the 1960s.

He spoke publicly about his addiction to alcohol which blighted his younger years. However, after he had a serious car accident and ended up in hospital with two broken legs he stopped drinking.

Fianna Fáil leader Micheál Martin has expressed his sadness at the passing of the former senator.

“Des was a man steeped in politics and community who served as a member of Seanad Éireann and North Tipperary County Council for over 30 years, having first being elected to the county council in 1955 and Seanad Éireann in 1965.

“I know that seeing both his children achieve high office was a source of great pride to him. I want to express my deepest sympathies to Des’s loving wife, Mona and to his children, at this sad time.

“Des was a great man who made an enormous contribution to Irish public life. He was also a wonderful raconteur and always tremendous company,” Ms Sherlock said.

“On the issues he is most identified with, he took his stand out of a deep personal conviction and went to great lengths to make his point without causing offence to others. He made no end of personal sacrifices in helping the pro-life cause and was always prepared to go the extra mile.

“We are all very fortunate in the Pro Life Campaign to have known him so well and to have benefited from his advice and wisdom right up to the end of his life.”

Requiem Mass for Mr Hanafin will be held at the Cathedral of the Assumption, Thurles, on Sunday June 25th at 12 noon after arrival at the Cathedral at 8.30pm on Saturday. Reposing at Hugh Ryans’ Funeral Home, Slievenamon Road, Thurles on Saturday from 5pm to 8pm.

1 Cork shootings: ‘Devastation was impossible to imagine’, funeral hears
2 Storm Aiden prompts nationwide weather alerts for Halloween
3 US election: ‘Trump would not be caught dead here unless he wanted our votes’
4 Earthquake death toll in Turkey rises to 12 with 419 people injured
5 Murder inquiry opened into death of woman and her two children in Dublin
Real news has value SUBSCRIBE