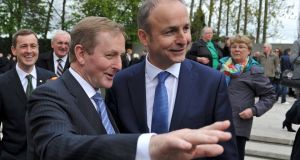 Fine Gael said ‘both party leaders are now being briefed, extensive drafting has to be done’. File photograph: Clodagh Kilcoyne/Reuters

A deal has been reached between Fine Gael and Fianna Fáil on the formation of a minority government led by Enda Kenny.

Confirming the deal, the two parties issued identical statements, saying they had “reached a political agreement to facilitate a Fine Gael-led minority government.

“Both party leaders are now being briefed, extensive drafting has to be done and then Fianna Fáil and Fine Gael will hold separate parliamentary party meetings to outline the details of the confidence and supply arrangement.”

The announcement came after several hours of negotiations Friday between the two parties.

The Independent Alliance group of deputies was called to a meeting with Fine Gael in Government Buildings on foot of the successful outcome of the talks.

A written document on the deal will not be distributed to Independent TDs at this stage, however, because it has to be ratified by both the Fianna Fáil and Fine Gael parliamentary parties.

Mr McGrath said the Fianna Fáil parliamentary party remained “on standby” for a meeting to ratify the deal in the coming days.

“It has been a tortuous and long and difficult at times process but I think that the formation of a minority government and the document that we can hopefully agree in the next few days can become a blueprint for future minority governments in this jurisdiction,” he said.

Similarly, Minister for Transport Paschal Donohoe for Fine Gael said the party’s voters and supporters would see the policies of Fine Gael’s general election manifesto in the agreement.

Negotiating teams from both parties resumed discussions in Trinity College at Friday lunchtime.

After a break of an hour, the talks resumed around 5pm, with the deal confirmed shortly after 7 pm.

This followed Minister for Health Leo Varadkar’s comments on Thursday when he said suspending water charges was not in the public interest.

He was strongly criticised by Fianna Fáil, with Mr McGrath accusing Mr Varadkar of attempting to further his own leadership ambitions. Mr Varadkar, however, said there would be no awkwardness in the Friday talks as a result.

On his way into the talks, Fianna Fáil’s Barry Cowen said there are outstanding issues surrounding housing and homelessness. He said this would focus on public housing, private housing, the rental sector and those in mortgage distress.

“We are coming to the conclusions of the negotiations, we hope,” Mr Cowen said. “There are some outstanding issues where we have an agreement, drafting issues continuing to be finalised between both parties.”

He said: “We’ll be keeping an eye on those also. Our intention is to address the whole area of housing and homelessness. It’s not as if it wasn’t discussed before. It was, but there was no agreement. We hope to reach agreement today.”

When asked about Mr Varadkar’s statements on water charges, Mr Cowen said: “I have no interest or comment to make in relation to that person’s ambition or his career path. I am merely focused on our duty to those we represent.”

A commission to examine pay levels across the public sector, including for new entrants, is also proposed in the agreement.

The commission, to be established within six months, is cast by sources as a mechanism for preventing strikes across the public sector, which would have the potential to cripple a minority government reliant on opposition co-operation.

The draft written agreement between the two parties is understood to focus on the mechanics of how a minority government would work. It is understood to contain about 30 points dealing with broad policy areas.

On the economy, the agreement commits to dividing the so-called fiscal space – the possible future resources available to the government – on a 2:1 ratio between spending increases and tax cuts.