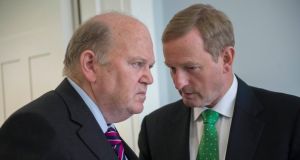 Fine Gael TDs have been told to highlight a “whiff of sulphur” off Sinn Féin in their attacks against the Opposition party in the run-up the general election.

Party strategists outlined the attack lines on their political rivals at a presentation to TDs and Senators at the Fine Gael think-in in Adare, Co Limerick.

Under the heading “attacking the opposition”, Sinn Féin’s weaknesses are that it “cannot be trusted; won’t tell the truth about past or future; double standards; whiff of sulphur”.

Renua Ireland, led by former Fine Gael junior minister Lucinda Creighton, is “all bravado, no substance” and has “no policies in key areas”.

The messages were contained in slides shown to the parliamentary party by Minister for Health Leo Varadkar, who is in charge of Fine Gael’s election communications strategy.

Fianna Fáil was described as “same old Fianna Fáil; learned nothing; high tax, high spend” while the Social Democrats – headed by TDs Róisín Shortall, Stephen Donnelly and Catherine Murphy – are accused of being “dishonest” about water charges and the cost of the Nordic model of taxation and spending.

Independents are seen as a “recipe for chaos and instability” who “will hold us to ransom”.

In a separate presentation, TDs and Senators were given highlights of successful attacks and messages utilised in the recent British general election.

The use by the Conservatives of the threat of a Coalition between the Scottish National Party and UK Labour was held up as a successful “wedge issue” which drove voters towards the Tories.

Fine Gael sources have previously claimed they could similarly use the prospect of Sinn Féin in government, possibly with Fianna Fáil, in a similar tactic.

Fianna Fáil leader Micheál Martin has said he will not enter government with Sinn Féin.

Sinn Féin has said it will not enter government as a junior coalition partner to Fianna Fáil or Fine Gael.