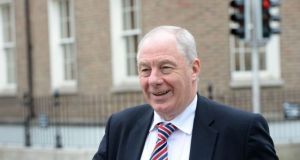 Michael Ring says a 5km limit was ‘not reasonable’ even in some parts of Dublin. Photograph: Eric Luke/The Irish Times

Government backbencher Michael Ring has confirmed he did not attend the Dáil for the vote on the emergency legislation introducing on-the-spot fines for failure to adhere to public health guidance, which was passed by 86 to 52 votes.

The Health (Amendment) Bill will give gardaí powers to issue fixed payment fines for breaches of Covid-19 regulations, including for travelling farther than the allowed 5km from home as well as for organising house parties.

Mayo Fine Gael TD Mr Ring said it was “Dublin thinking” to impose a 5km limit on travelling from home. This was discriminatory against rural people, he added.

In the vote on Friday, Labour’s six TDs supported the three Government parties on the legislation, as did four of the Regional Independents and one member of the Independent group.

Sinn Féin, the Social Democrats, Solidarity-People Before Profit, four of the Regional Independents, three Rural Independents and five of the Independent group of TDs all opposed the Bill.

Mr Ring had earlier signalled he will not support his own Government’s emergency legislation because he objects to the 5km travel restriction.

Mr Ring had said he would either abstain or absent himself from the Chamber when the Dáil voted on the legislation.

The Bill was voted on days after the country entered Level 5 of coronavirus restrictions.

The former minister for rural development may lose his party’s whip as a result of his refusal to support the legislation.

Mr Ring said that for people in the countryside, especially those living in isolated areas, 5km was no distance, as often there were no villages or few neighbours within that radius. He said that it could not be compared to densely populated urban areas, and it would be “cruel” to ask rural people to stay within that distance from their homes.

He said 5km was “not reasonable” even in some parts of Dublin.

Speaking on RTÉ Radio 1’s News at One, Mr Ring said public health professionals had a responsibility not only for Covid-19 but for mental health, cancer and for people on waiting lists as well.

“The mental health situation is getting very serious,” he said.

Mr Ring repeated the criticism he made to The Irish Times last week that putting Level 5 restrictions on people was “cruel, cruel” and would impose more hardship than anything else.