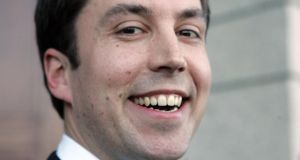 A Fine Gael TD has accused his party of abusing the independence of the Dáil and failing to implement fundamental political reform.

Dublin South East deputy Eoghan Murphy said the resistance of some in Fine Gael to meaningful change in the political culture had been demoralising.

Writing in today’s Irish Times Mr Murphy says that TDs newly elected for Fine Gael in 2011 are standing over the practices of the past. “Why should we, when it is those very same practices that motivated us to get involved in politics to change them,” he asks.

Mr Murphy is a member of the so-called five-a-side group of new Fine Gael TDs who have been at loggerheads with the leadership. His comments will increase pressure on Taoiseach Enda Kenny, who is fighting a fierce political battle to regain the initiative on Irish Water.

He points to the way legislation setting up Irish Water was approved after only three hours of debate. “Today the credibility of Irish Water lies in tatters, the issue now undermining everything else the Government is trying to achieve,” he writes.

Fine Gael needs to commit immediately to loosening the Government’s grip on the Dáil by making most votes being free and abolishing the Economic Management Committee, Mr Murphy says.