Fine Gael set to shake up departments, Dáil and ministries

Government will have a very different configuration than anything before, writes Harry McGee 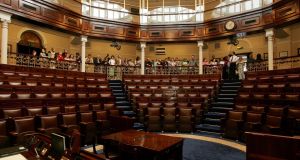 The government to be announced tomorrow will have a very different configuration than anything that has gone before.. Photograph: Aidan Crawley

The government to be announced tomorrow will have a very different configuration than anything that has gone before. There have been shake-ups before but none of the magnitude envisaged with this minority Fine Gael government.

That will happen across three distinct levels. The first will be shake-ups of government departments. There will be change but there have been dramatic changes before, not least the break-up of Finance into two departments in 2011.

The second part will be the ministerial line-up. For the first time since the interparty administrations more than six decades ago there will be senior government ministers – at least two and possibly three – who belong to no party.

The third component of change will be parliament itself. With a lead government party commanding less than a third of the seats in the Dáil, policy initiatives and major legislation will have to be finessed through by a mixture of barter and compromise. Legislation will have to go through exhaustive scrutiny in committee stage before hitting the Dáil floor.

In addition, it is likely that key committee meetings and plenary meetings of the Dáil will no longer be scheduled for the same time. That means committees will become more powerful. It will also greatly increase the workload of TDs and will be particularly welcome by those deputies who see themselves as legislators.

“We have a minority government that is 20 seats short that includes Independents who are untested and untried.”

The situation was going to be very difficult, especially on budgetary matters and on getting key legislation through, the official said.

“We will have to adjust our system to work with Independents and with Fianna Fáil, and the other Opposition parties, on all big decisions and legislation. It is not a question of convincing the main ministers of the governing party any more. That will involve changes, some of them big, for the civil service.” Departments The Fine Gael manifesto suggested the possibility of Public Expenditure and Reform (PER) being merged back into Finance. That is not going to happen and it will stay as a separate department.

One of the things Fine Gael was not keen to do was set up new departments, as happened with PER and Children. These entities take time to set up and getting them up to pace can be messy.

The third element of the old Environment portfolio - community - is likely to be amalgamated with Arts, Heritage and the Gaeltacht, along with a communications function. This is likely to become the new Department of Rural Affairs.

Ministers Despite his recent health issues, Michael Noonan looks set to return to Finance. He played a key role during the discussions when he intervened just when the talks between Fine Gael and Fianna Fáil seemed doomed to failure.

The person talked about to become Minister for Public Expenditure is not Richard Bruton but Dublin Central TD Paschal Donohoe. He was one of the four Fine Gael negotiators and has also impressed as a surprisingly obdurate Minister for Transport.

Policy-driven Bruton is being tipped for Education, a department in which he has a keen interest.

Leo Varadkar and Frances Fitzgerald are likely to stay put in Health and Justice respectively, with the latter becoming Tánaiste. However, Varadkar’s name has also been mentioned for Foreign Affairs.

Enda Kenny has made commitments in relation to gender balance. Besides Fitzgerald, it is likely Heather Humphreys will be reappointed (to Agriculture). In addition, Regina Doherty from Meath East and Marcella Corcoran Kennedy from Offaly are said to be in line for promotion. Doherty could become Minister for Arts, Heritage, Community and Gaeltacht.

Independent TD Katherine Zappone is also likely to be included, with the Children portfolio suggested as a good fit for her. Corcoran Kennedy may become Minister for Social Protection.

Rising star Simon Harris will also certainly win a promotion. His name has been associated with Transport, as well as Social Protection. But there is a school of thought within Fine Gael that, with so many Independents on board, the role of chief whip will become crucial.

Whoever takes the job will have to assume the responsibilities that Bertie Ahern and Séamus Brennan each took on when Fianna Fáil was in somewhat similar territory. Harris might not be thrilled at the prospect. Other who have been mentioned as a possible chief whip are Damien English and Eoghan Murphy.

Independent TD Denis Naughten might become Minister for Rural Affairs, especially if he can convince more than one other member of the so-called Rural Alliance to jump with him. His constituency colleague Michael Fitzmaurice of the Independent Alliance may be a minister of State, as might the Dublin Bay North Independent Finian McGrath. Shane Ross is said to be interested in the Jobs and Enterprise portfolio. He is likely to get a full Ministry.

If Michael Healy-Rae agrees to join the Government he will also be a strong contender for a junior Ministerial portfolio.

There is some speculation Minister for Foreign Affairs Charlie Flanagan might be vulnerable. Eoghan Murphy, Galway West TD Sean Kyne and the Cork North Central Deputy Darragh Murphy are all highly regarded and could get a big promotion.

Parliament Two of the key committees will be the Budget Committee (with responsibility for budget preparations) and the health committee (charged with designing long-term strategies for the health sector).

The committee chairs will be chosen by the D’Hondt system, which means Fine Gael will have first dibs on the budget committee. The new TD for Clare Dr Michael Harty has been mentioned as a possible chair of the health strategy committee.

An unknown at this moment is the stance of other Opposition groups, besides Fianna Fáil. Will they adopt a traditional opposition approach, or a more nuanced one that involves active participation in what will be far more powerful and influential committees?