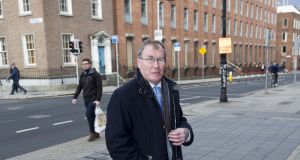 Fine Gael Senator Colm Burke has finally made it to Dáil Éireann after winning the third seat in Cork North Central some 38 years after he first contested the constituency for the party.

An emotional Mr Burke, flanked by wife Mary McCaffrey as he was congratulated by Tánaiste Simon Coveney and former Fine Gael TD Bernard Allen, spoke about what his success meant to him.

“Personally, I am delighted – there was such a team effort made by the organisation, and working as a team we delivered the votes and delivered the seat for Fine Gael in Cork North Central.

“It’s very satisfying personally, but it’s also a great thing for the Fine Gael organisation in Cork North Central – it’s a huge boost for them because we’ve gone through difficult times over the last few years here in the constituency”.

Mr Burke recalled how he was just out of university when he ran in 1982 alongside then-sitting Fine Gael TD Liam Burke (no relation) only to finish seventh.

Health issues prevented him from running again until 1994, when he ran in a byelection in Cork North Central to fill the vacancy caused by the death of popular Labour TD, Gerry O’Sullivan. He again came up short then ,finishing in third place behind Kathleen Lynch then of Democratic Left.

Mr Barry, who polled 3,703 first preferences but then picked up 1,459 transfers from Mr Gould to leapfrog ahead of Independent candidate Kenneth O’Flynn (son of former Fianna Fáil TD Noel O’Flynn) on the second count.

Mr Barry stayed ahead of Mr O’Flynn all the way to the 14th count and the distribution of Mr Moran’s vote, where he picked up 1,971 transfers to Mr O’Flynn’s 509, saw the margin widen to 2,349 to take the last seat without reaching the quota.

Mr Burke served as lord mayor of Cork in 2003/4 and in June 2007 was co-opted to replace MEP Simon Coveney in the European Parliament and served as an MEP until July 2009 election when he got 53,700 votes but lost his seat.

He contested a selection convention to run in Cork North Central in 2011 and lost our narrowly to Bernard Allen who along with Cllr Pat Burton were chosen at convention to run, but the party added Dara Murphy as a third candidate

However, when Mr Allen withdrew on health grounds, the party decided to revert to a two-candidate strategy and never added Mr Burke to the ticket, despite him being narrowly defeated at convention for the nomination.

A senator since 2011, Mr Burke was narrowly beaten by Mr Murphy for the nomination in 2016 when the party again overlooked him by adding newcomer, Julie O’Leary as Mr Murphy held the seat only to become mired in an expenses controversy.

Mr Burke ran in last November’s byelection caused by the election of Fianna Fáil’s Billy Kelleher to Europe, and while he increased Fine Gael’s share of the vote to 20 per cent, he failed to take the seat.

Former Fine Gael minister and Newstalk Hard Shoulder host Ivan Yates predicted Mr Burke would not win a seat in Cork North Central this time out, but Mr Burke was in a generous mood when asked about it after his success.

“Ivan doesn’t always get it right – none of us are perfect - I am waiting for the congratulations card from Ivan in due course,” said Mr Burke as he accepted congratulations from rival candidate Kenneth O’Flynn.