Having essentially lost the election, party determined not to repeat mistakes 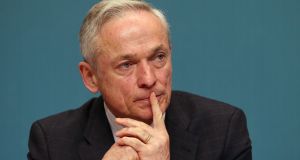 Chairman of Fine Gael parliamentary party Richard Bruton: "I think people did perceive the party as not being ‘on your side’ and that is one of the most difficult challenges if a party comes to be perceived as being sort of detached." Photograph: Laura Hutton

Fine Gael was seen as detached and not on the side of the public in this year’s general election, according to the blunt finding of an internal party review that has followed months of soul-searching.

Recently-appointed chairman of the parliamentary party Richard Bruton spent weeks meeting TDs and Ministers throughout the summer to get their views. The party won 35 seats in February’s general election, 15 fewer than it did in 2016.

7 Addicted to Diet Coke: My battle to beat a 27-year, seven-a-day habit

13 Netflix: 10 of the best new shows and films to watch in March

14 Fintan O’Toole: Suspicion of Government is fuelled by lack of scrutiny

17 Vaccinated in London: I feel guilty that people I love in Ireland haven’t been inoculated

18 Bill Gates: ‘I’m not trying to take anything away from Greta Thunberg, but...’

19 Covid-19: 10 things we thought about the virus a year ago – that turned out to be wrong

20 If you want to have children, like I did, lockdown has intensified the ‘panic years’

22 Pfizer vaccine may be less effective in people with obesity

24 French camp scrambling hard to explain how the bubble burst

25 Pandemic means religion for religion’s sake is gone. That’s not a bad thing

27 Barry Gibb: ‘My brothers had to deal with their demons, but my wife wasn’t going to have it’

28 Coombe master did not vaccinate students on standby, inquiry hears

34 When a ‘good father’ decides to kill his whole family

36 ‘Defund Paw Patrol’: Why protesters have turned against a kids’ cartoon

39 Sienna Miller: ‘I could have not gone out, not worn what I liked. I took them all to court instead’

40 Surgeon being investigated after making court appearance from operating theatre