Almost all donations to political parties above €1,500 were from elected representatives 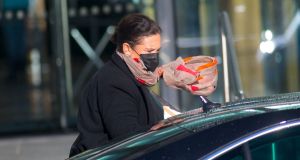 Sinn Féin president Mary Lou McDonald has told Sipo a €4m donation to her party from a UK resident falls outside the remit of the ethics watchdog. Photograph: Gareth Chaney/Collins

Almost all donations to political parties above the €1,500 threshold that requires their disclosure were made by elected representatives, the latest report from the Standards in Public Office (Sipo) commission shows.

Fine Gael received more donations greater than this sum last year than any other political party, declaring €79,456 it had received in donations of €1,500 or more.

The vast majority of the party’s TDs made donations, as well as one Senator, and three MEPs. No private individuals were listed as making donations to Fine Gael over the declarable limit last year.

The majority of Fine Gael TDs donated between €1,500 and €1,700 to the party. Two TDs donated close to the maximum amount permitted per individual, Bernard Durkan (€2,441) and former minister for housing Eoghan Murphy (€2,402).

Sinn Féin declared that it had received €45,620 in donations above the €1,500 threshold last year from 19 of the party’s elected officials. The majority of TDs and Senators listed as donating to the party gave close to the maximum permitted amount of €2,500.

The party did not record any private individuals donating more than €1,500 in the State last year.

Political parties are required to disclose the details of any donors who give more than €1,500 in a year in an annual declaration.

Donations of less than €1,500, such as those in annual party fundraising draws, are not included in Sipo’s annual reports on donations.

The Labour Party reported the third highest amount of large donations, with €21,800 donated by its parliamentary party members last year.

The Green Party recorded the fourth highest amount of declared donations in 2019 at €9,000. This included a €2,500 donation from MEP Grace O’Sullivan, and donations from three private individuals.

The Social Democrats and Solidarity-People Before Profit did not declare any donations over €1,500.

The National Party, which has no elected officials,declared it had received €7,500 last year, which included two donations of €2,500 from its party leader Justin Barrett, and deputy leader James Reynolds.

In total some €175,576 was disclosed in donations by political parties last year, according to the Sipo report published on Tuesday.

It comes as Sinn Féin continues to face questions over a €4 million donation made to the party last year, left in the will of an English man William Hampton.

Following queries over the donation from Sipo, party president Mary Lou McDonald told the ethics watchdog the donation had been accepted by the party’s office registered in Northern Ireland and therefore did not fall under the commission’s remit.

Unlike in the Republic, there is no limit in the UK on the amount that can be donated to political parties by persons who are on the UK’s electoral register.