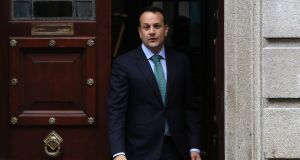 The potential cost of the promises made by Fianna Fáil and Fine Gael in their coalition framework document has caused concern in both of their parliamentary parties.

The document was approved by meetings of both parliamentary parties, but concerns were raised about how realistic the promises within it are.

The document says that there will be no increases in income tax or USC, no cuts to core welfare rates – understood to be those separate to payments established to deal with the effects of the Covid-19 crisis – and that capital spending will be a priority and will be funded through borrowing if necessary.

It also commits to significant State investment in the areas of health and housing, among other sectors.

The two Civil War parties have 72 Dáil seats between them, eight short of a majority, and want Labour, the Social Democrats or the Greens, as well as some Independents, to join them in government.

The smaller parties will be asked to consider the framework document and consider entering negotiations on a full programme for government.

A Labour source on Wednesday night expressed concern about the income tax pledge, which is a priority for Taoiseach Leo Varadkar and Fine Gael. Fine Gael made a similar commitment while in coalition with Labour between 2011 and 2016.

“Putting into a document that there will be no income tax or USC increases on anyone, no matter how much they earn, to help us get out of this mess is unbelievably stupid,” the Labour source said, adding that Fine Gael’s previous such “insistence totally undermined” the 2011-2016 government.

Among those who expressed concerns at a Fianna Fáil parliamentary party meeting about the commitments were frontbench TDs Jim O’Callaghan and John Lahart, as well as Carlow-Kilkenny TD John McGuinness and Senator Fiona O’Loughlin.

Michael McGrath, the party’s finance spokesman, is understood to have said voters would not tolerate increases in taxation, nor would welfare recipients tolerate reductions.

At the Fine Gael meeting, Minister for Rural and Community Development Michael Ring said he is opposed to coalition with Fianna Fáil, while Ministers Michael Creed and John Paul Phelan also had concerns.

Patrick O’Donovan, the Minister of State at the Department of Finance, raised concerns about costs, as did Senator Seán Kyne, the former government chief whip.

Mr Phelan is also understood to have raised concerns about the potential effect of coalition on Fianna Fáil and Fine Gael TDs competing in the same constituencies. Party sources have previously given the examples of constituencies such as Cork South-Central, Mayo and Longford-Westmeath, where the two parties hold three out of four seats. In Cork North-West, Fianna Fáil and Fine Gael hold all three seats between them.