Fianna Fáil senator Darragh O’Brien is greeted by supporters at the National Show Centre where the count is continuing. Video: Conor Pope 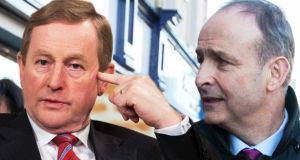 Will Taoiseach Enda Kenny (left) and Fianna Fáil Micheal Martin end up forming a government? Senior Fine Gael and Fianna Fáil sources were privately conceding on Saturday that a coalition between the two parties was the likely outcome of the general election.

Senior Fine Gael and Fianna Fáil sources are privately conceding that a coalition between the two parties is the likely outcome of the general election.

As counts continue throughout the country, they admitted that public pressure on the two parties would be intense if the alternative to a coalition was another general election.

The sources, on the basis of anonymity, said the real talking would only begin after, as is expected, the new Dáil fails to elect a government when it meets on March 10th.

“We could go to a delegate conference seeking a mandate to go into a coalition from a position of strength,’’ said a Fianna Fáil source. “We will be within striking distance of Fine Gael in seats and in a position to demand an equal number of ministries.’’

The Fianna Fáil source said party leader Micheal Martin’s successful campaign had enhanced his popularity with the grassroots and he would be able to persuade a delegate conference to give the go-ahead for coalition.

“It would be different if we were in a weak position,’’ said the source. “Coalition would be a non-runner and it would be a case of going back into opposition and continuing to rebuild.’’

The source said the successful general election had followed a very successful local elections. “Truth to tell, we are surprised at the speed of our recovery,’’ said the source.

Conceding that a FG-FF alliance was likely, a Fine Gael source said it would eventually be a question of going along with the people’s will.

“We would be slaughtered by voters if we caused another election by refusing to talk to Fianna Fáil ,’’ the source added. “We would have preferred to continue with Labour, but the figures appear to speak for themselves.’’

Fine Gael sources have firmly ruled out a heave against Enda Kenny in the aftermath of the election. “We would look idiotic in the eyes of the public,’’ said a source. “Anyway, we are all to blame for the poor campaign.’’

Fianna Fáil is privately not ruling out seeking a rotating taoiseach arrangement if the coalition becomes a runner.

One long-serving Fianna Fáil TD outlined a possible scenario whereby Micheal Martin would take over as taoiseach if, as expected, Mr Kenny stood down midway through the next government’s term.

The private acceptance of a coalition arrangement follows a series of interviews throughout the day with Fianna Fáil and Fine Gael personnel who have not publicly ruled it out.

Fianna Fáil TD Michael McGrath, who is expected to be elected in Cork South Central, said Fianna Fáil, like other parties, would have to reflect on its position.

Fianna Fáil TD Éamon Ó Cuív indicated his party could negotiate with both Independents and Labour as part of efforts to form a new government.

The party’s former deputy leader noted than “an awful lot of independents” in contention for seats are from” gene pool Fianna Fáil” .

Speaking at his constituency’s count centre in NUI Galway on Saturday, he cited former Progressive Democrat Noel Grealish in his own constituency, the Healy-Raes in Kerry, Mattie McGrath in Tipperary and Seán Canney who topped the poll in Galway East as examples.

“That’s our first port of call - to go to the people who are closest to us and with whom you have no philosophical differences,”he said.

Mr O Cuiv noted that Fianna Fáil had never ruled out Labour, but Labour’s low numbers reflected the fact, in his view, that a “slightly left party” had “acted in very right wing fashion” with budgets that were “totally regressive”.

Mr Ó Cuív was adamant that his party would stick to its election promise not to go into government with either Fine Gael or Sinn Féin.