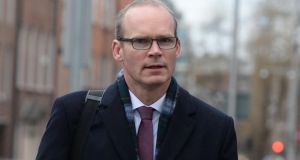 Minister for Housing Simon Coveney has been at the centre of the row between Fine Gael and Fianna Fáil over water charges. Photograph: Dara Mac Dónaill

Senior figures in Fine Gael and Fianna Fáil have indicated they will begin moves today to defuse the bitter row over water charges that has brought the confidence and supply agreement between the two parties close to collapse.

A tentative agreement between both parties on the issue disintegrated spectacularly last week, with each party accusing the other of reneging on the deal.

As the row escalated over the weekend, Fianna Fáil’s lead negotiator, Barry Cowen, warned that his party would not facilitate the election of a new taoiseach if Fine Gael refused to draft legislation based on the report of a special Oireachtas committee looking at water charges.

In an email to Oireachtas colleagues, Mr Cowen asserted that Fine Gael has acted in “clear bad faith” and would now need to be constructive rather than destructive.

In a reference to Minister for Housing Simon Coveney and Minister for Social Protection Leo Varadkar, he said: “Both of the Ministers campaigning for their party’s leadership would be well-advised to understand that this behaviour means that Fianna Fáil will require full confirmation of Fine Gael’s intention to honour its commitments under the confidence and supply agreement before facilitating any potential changes to Government personnel and roles.”

The Oireachtas committee report is completed but its publication has been held back until Tuesday to allow the committee’s legal adviser, David Nolan SC, to scrutinise its final recommendations.

While some amendments might be made on foot of that advice, there is general consensus that the basis of the report will stay unchanged.

The Government will have one month to bring forward legislation to implement the report, which will be debated in the Dáil this week.

Mr Coveney accepted on Sunday that he would proceed with legislation even if the report was inimical to Fine Gael’s core policies on water charges.

“The report is flawed and Fine Gael will not support it. At the same time, I will need to bring forward legislation for the parts of the report that are good and legally sound.

“For some other of the recommendations, I will need to seek the advice of the Attorney General to make sure that Ireland does not face fines for breaching the Water Framework Directive and the ‘polluter pays’ principle,” he said.

However, senior strategists for both parties insisted that the simmering row did not mean that Fianna Fáil and Fine Gael were on a collision course that would result in a general election.

A Fine Gael source said: “Fianna Fáil feel they went too far. In Fine Gael, maybe we were a bit too pushy. There was very bad politics from both parties. The dynamic resulted in a mess.

“What is needed is a charging system for people who will use excessive water. The EU Commission would like more houses to have meters.

“We have a defensible position if we agree. We need to get back there and take some of the heat and personal insults out of the debate.”

Equally, a Fianna Fáil strategist said: “Calm heads will have to prevail. There has to be respect for each other and compromises will have to be made.

“We are open to that when the Bill is being debated. Fine Gael also needs to be open.”

Both sides pointed to their mutual agreement that 8 per cent of households (those who use 1.7 times the “normal usage”) should be charged for excessive use. Mr Cowen says the one major stumbling block is the major dispute as to how that is calculated.

A senior colleague of his said there was “cautious optimism” that a deal could be brokered over meters and the charging system.

Separately it emerged yesterday that 675 employees of Irish Water received bonus payments of an average of almost €5,000 last month.

The company said the payments were on foot of a Workplace Relations Commission ruling.