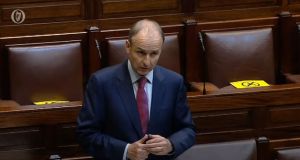 New Taoiseach Micheál Martin. One of the advantages of Government is you get to control the agenda a lot of the time. A week and a half in office and Martin’s administration has yet to demonstrate it can do so. Photograph: Oireachtas TV

Opposition leaders had their first chance to question the new Taoiseach Micheál Martin on Tuesday in the socially-distanced Leinster House, and those hoping for a clearer government-opposition split than typical in the muggy days of confidence-and-supply were disappointed.

Sinn Féin leader Mary Lou McDonald – first up as leader of the Opposition – ended up agreeing that she and Martin were “of one mind” on the issue of extending maternity benefits, differing only on the timing and urgency.

Labour leader Alan Kelly had a go at Sinn Féin as much as Fianna Fáil.

Richard Boyd-Barrett stood up for “working people”. Martin told him things were “not that simple”. Perhaps it would be unfair to call it a damp squib; but it was a pretty tame affair.

Nonetheless, Tuesday’s Dáil session contains two important signposts to the conduct of politics in the coming weeks and months.

Firstly, Sinn Féin chose a low-key, bread and butter issue relating to the delivery of State services and payments – in this case the extension of maternity benefits – as its first question to the new Taoiseach.

No high-flown rhetoric about “change”, no questioning the mandate of the Government or its legitimacy. Just small-bore stuff that affects people’s daily lives, likely to play well with the Facebook groups and social media audiences that the party targets relentlessly. Expect more of this.

Martin replied that Ministers were in consultation on the issue. The Government wanted to do it, but do it in a “considered way”.

Do the right thing, urged McDonald. Just do it.

“It is not as simple as the deputy has outlined,” pleaded Martin.

The second indication of future direction was when Rise TD Paul Murphy challenged the Dáil’s order of business, seeking that Fianna Fáil TD and new Minister for Agriculture Barry Cowen should answer questions after his personal statement in the Dáil on Tuesday evening.

Cowen was scheduled to make a statement on his 2016 ban for drink-driving, but Murphy wanted him to take questions afterwards – a practice that became routine in the last Dáil.

However, that was only because the Government didn’t have a majority in the last Dáil, and was forced to submit to the will of the House on such matters.

Now it does have a majority, and backed by that majority, its writ runs in the House. Pushed to a vote, Murphy lost. We will see more of this – the Government will use its power in the Dáil.

It may have been a relief to the Government which is (nervously) backing the Minister, but the resumption of Dáil business comes after a pretty torrid first week for the new Taoiseach.

The Opposition seems to have little enough appetite for going after Cowen, while his Government allies will – in the absence of any new, damning revelations (speeding fines and parking tickets do not qualify) – grumpily keep faith with their colleague.

But combined with MEP Billy Kelleher’s admission that he violated quarantine rules to attend the election of the new Taoiseach, the frequency of apologies from Fianna Fáil politicians in recent days has been rather higher than ideal for Martin.

There is lots going on in the background, Government insiders claim, with Ministers getting to grips with their departments and an intense legislative programme for the next few weeks underpinning special Covid supports and necessary for the big economic stimulus programme likely to be launched next week. There are highly-pressurised decisions on reopening required. But mostly the public have seen and heard Fianna Fáilers saying sorry.

One of the advantages of Government is you get to control the agenda a lot of the time. A week and a half in office and Martin’s administration has yet to demonstrate it can do so.